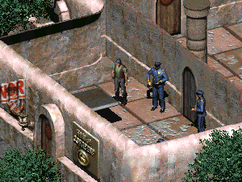 Feargus is the Hall of Congress receptionist and New Khans spy in 2241.

Commonly regarded as an epitome of a budding bureaucrat, the plain-looking Feargus is the receptionist of the Hall of Congress in NCR. Sometime before 2241, he was co-erced by Darion into spying on the Republic forces and deliver monthly reports to him, so that the New Khans could organize a valid resistance. The reports contained monthly production totals, caravan schedules, security rosters, minutes of Congressional hearings, secret council reports, diplomatic correspondence from New Reno, Redding, and Vault City, even several weeks worth of President Tandi's appointment schedule.

He did realize the dangers of working on two fronts, however, and would not miss Darion if he had a fatal accident.

By acquiring the NCR spy holodisk, the Chosen One can expose Feargus' dealings with the Khans to President Tandi for an ample reward. Feargus leaves the Congress building immediately and leaves it ambiguous about his fate afterwards.

Feargus appears only in Fallout 2.

Feargus is named after a producer and lead designer working on Fallout and Fallout 2.

Retrieved from "https://fallout.fandom.com/wiki/Feargus_(NCR)?oldid=3276178"
Community content is available under CC-BY-SA unless otherwise noted.