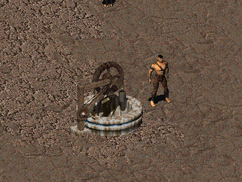 Fix the well for Feargus

Feargus is the Chosen One's nephew[1] and fellow tribesman in Arroyo in 2241.

Feargus appears to be constantly complaining or moaning about every problem posed against him, most notably the well being broken in the center of the village.

Feargus appears only in Fallout 2.

Feargus was named after Feargus Urquhart, the producer of Fallout 2.

Retrieved from "https://fallout.fandom.com/wiki/Feargus_(Arroyo)?oldid=3155639"
Community content is available under CC-BY-SA unless otherwise noted.