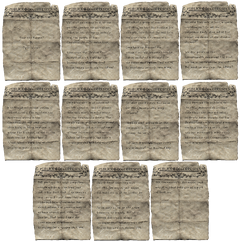 Fear the Future? is a paper note in Fallout 4. It is one of several articles published by Publick Occurrences.

It can be found around Diamond City, in the Publick Occurences stand behind Nat Wright if the player character finished the Nuclear Family quest and completed Story of the Century for Piper Wright beforehand.

Fear the Future?
By
Piper Wright

We've all succumbed to it, at one point or another. No matter how brave, or how strong we actually are, the people of the Commonwealth have known Fear.

Ever since the "Broken Mask" incident of 2229, right here in Diamond City, when the first human-looking synth infiltrated and attacked a group of innocent settlers, we have lain awake in bed at night, terrified of the Institute and everything it represents.

Long have we dreaded the possibilities: Will someone I know be taken in the night for who knows what reason? Will one of my loved ones suddenly turn on me, because they are, in fact, a synth replacement? Or will the boogeyman finally step out of the closet and devour all who stand in it way?

We, the people of the Commonwealth, remember the past. We live in terror in the present. But must we also fear the future?

In an almost unthinkable series of recent events, the Institute has destroyed anyone in the Commonwealth who could conceivably stop them, including longterm player the Railroad, as well as the newly arrived Brotherhood of Steel. What's more, the shadowy, sinister organization has completed work on an advanced nuclear reactor that will provide them with nearly unlimited power for the foreseeable future. This surely means greater underground expansion, as well as increased range of their teleporter technology (which, until recently, had been a closely-guarded Institute secret).

So what exactly does this mean for the Commonwealth, going forward?

"Nothing good" seems to be the consensus. In fact, most people assume the worst.

But isn't it possible these fears are unfounded? The Railroad may have opposed the Institute, but they also defended all synths - even those who would potentially infiltrate human society. And the Brotherhood's mighty airship may now lie a smoldering wreck - but was the neo-knightly order really interested in the Commonwealth's best interests anyway?

But perhaps the most compelling reason not to give up hope just yet is the fact that, if my sources are correct - and I know they are - the Institute is now under direct influence of someone many of us have already met - the Vault Dweller. That lonely figure who came into our settlement searching for a missing child, and clearly found something else entirely. And maybe, just maybe, the Institute is all the better for it.

So be wary as we go into a new tomorrow, my friends. But stay strong. And always, always remember that humanity lives and dies on the surface. Humanity IS the Commonwealth. And maybe, just maybe, the Institute can be a part of that now.

In the article written on Piper's terminal, the player character is referred to as Wanderer rather than the Vault Dweller or Sole Survivor.