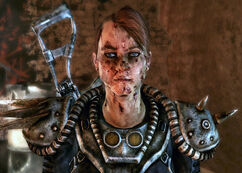 “And what're you doing down here, slave? Don't tell me that your pale ass is gonna throw down?”

Faydra is one of the Pitt raiders in the year 2277.

Faydra guards the hole leading into the Arena. It takes someone of considerable combat potential to impress Faydra, because she has seen them all and has managed to scavenge a few momentos of past Arena victims' weaponry, which she keeps in a locker.[1]

She stands around in front of the Hole, waiting for an unlucky scab to get booted down and thrown into the fight.

Dropping any consumable items near Faydra will result in her picking them up. However, pickpocketing will reveal that they are not in her inventory.

Faydra appears only in the Fallout 3 add-on The Pitt.

Faydra's name in the G.E.C.K. is sometimes spelled "Phaedra."

Retrieved from "https://fallout.fandom.com/wiki/Faydra?oldid=3432255"
Community content is available under CC-BY-SA unless otherwise noted.