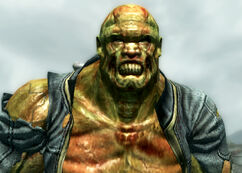 Fawkes is a super mutant and possible companion of the Lone Wanderer in 2277. He is an outsider amongst his kin, as he has retained his civility and intelligence through the rigors of mutation.

When the Lone Wanderer first encounters Fawkes, he is confined to Isolation Room 05, a cell in Vault 87 in which he has resided for as long as memory permits. Fawkes claims that he was able to attain literacy and a civilized personality (things most super mutants sorely lack) by gleaning as much information as possible from the vault's immense online database (or at least until recently as the terminal that he used was taken away from him). Fawkes credits his intimate knowledge of Vault 87 to being a resident there before being transformed into a super mutant, additionally he wears the tattered remnants of a male Vault 87 jumpsuit, possibly due to him outgrowing it while mutating.

A series of unused holotapes which were meant to be found in Vault 87 shed possible light to the identity of Fawkes.

“...but let me start at the beginning. My name is Shelton Delacroix, and I'm a security officer here in Vault 87. I'm assigned to the laboratory level, which sure beats babysitting the reactor room!”— from the first unused holotape

The holotapes are part of a daily diary Shelton started to record, detailing his "life in one of Vault-Tec's newer vaults." The first tape is primarily an introduction, but the later tapes concern some bizarre sounds Shelton hears while on shift, and later something disturbing he witnessed.

“Sykes and Cossler dragged some unconscious guy from the dorms into the labs. I tried to ask what was going on, but they just glared at me....
After they left I snuck into the containment room, and... and I almost threw up. I don't even know how to describe it. It looked sort of human, but it was deformed... I could see some of its organs on the surface of its body like they were trying to push through.”— from the third unused holotape

Shelton's next recording reveals that his recordings eventually came to the attention of the wrong people. The recording is made as Shelton is hiding in the reactor room.

“What the hell am I supposed to do now? Merrick and his team are obviously experimenting on people. Someone's got to put a stop to it. But how? There's nowhere to go and no one to tell. Shit, what am I gonna... Oh my god. They're coming... I... Tell my wife in Dorm E that I love her... I...”— from the fourth unused holotape

The fifth and final holotape reveals what eventually happened to Shelton after his capture.

“Stupid machine... how you work this thing... this thing is stupid! Smash it!”— Fawkes on the fifth holotape

It is important to note that, although Fawkes shares the same voice as most of the Capital Wasteland's Super Mutants, he is explicitly defined within the game's dialog files as being the speaker in the final recording.

Though nothing is left to document why these recordings were not included in the final version of the game, it is interesting to note that Fawkes' demonstrated intelligence does not appear to be present in the fifth holotape recording, consistent with his statement that he had to work to become as intelligent and well-spoken as he was at the time of meeting the Lone Wanderer.

Fawkes lives in Isolation Room 05, a cell in Vault 87. Should he find a way out of there, he will be at the Museum of History inside the lobby.

Fawkes pleads with you to be released from his cell. In exchange for release, Fawkes retrieves the Garden of Eden Creation Kit device from a radioactive section of the vault, and then bids the Lone Wanderer farewell.

After the player is incapacitated and taken to Raven Rock, home of the Enclave, Fawkes appears as the Lone Wanderer emerges from the base. He repels any Enclave soldiers with an acquired Gatling laser to aid the player's escape. Any items given to Fawkes before the trip to Raven Rock will be gone when he is encountered yet again, presumably discarded in favor of his new weapon. If your Karma is high enough, the player has the choice to add Fawkes as a companion.

Main article: Take it Back!

When the player is faced with the climactic decision at the conclusion of the game, Fawkes politely declines to enter the radioactive room in lieu of the player (even though he is immune to radioactivity), stating that the decision is the player's destiny and not his. However, if the player has the Broken Steel add-on installed, the option to send Fawkes in will appear, allowing the player to opt out of entering themselves or Sentinel Sarah Lyons. When this option is used, he states that although he was going to tell the player that the player's destiny lies in that chamber, he has already altered his own.

* If you take Fawkes' super sledge, it is replaced with a non-playable sledgehammer.

Fawkes shares many sentences with the regular super mutants, but also features many unique quotes of his own, often referring to his and Uncle Leo's possible Zen philosophy.

Fawkes only appears in Fallout 3.

Full body shot
Add an image to this gallery

Retrieved from "https://fallout.fandom.com/wiki/Fawkes?oldid=970729"
Community content is available under CC-BY-SA unless otherwise noted.