MQ08Fawkes.txt (Finding the Garden of Eden)

Fawkes is a super mutant and possible companion for the Lone Wanderer in 2277. He is an outsider among his kin, having regained his civility and intelligence following the rigors of his mutation.

Imprisoned in Vault 87's medical area, Fawkes is an anomaly among his brethren. Where the majority of mutants are aggressive, barely intelligent brutes, he is an educated, soft-spoken person that keeps his violent impulses in check. He is one of the original dwellers of the Vault, and can still remember glimpses of his past, of the Vault in its prime, with scientists and regular dwellers walking through the halls. However, these glimpses are all that remains of his past, and the inability to recall his past identity torments him to no end.[1][2][3]

His origin is the same as any other Vault 87 super mutant: He was taken by the mutants and exposed to the modified FEV used in the Vault's Evolutionary Experimentation Program. However, unlike other victims of the virus, Fawkes managed to survive the mutation process with his mind intact. Where others would succumb to excruciating pain and become insane, he retained enough of his intelligence to be capable of speech immediately after the process completed. He was branded a failure by his captors and placed in isolation room 5 in the medical ward. Where normally he would be killed, he was different enough for the super mutants to keep him as a curiosity.[1][4]

Fawkes is 200 years of age.[5] The damage caused by the mutation resulted in a warping of Fawkes' existing neural pathways, resulting in extensive memory loss.[2]

Fawkes coped with the damage thanks to a working terminal still present in the recovery room that acted as his cell. Thanks to its connection to the Vault mainframe, Fawkes was able to study history, literature, science and other subjects. The extensive database of book files gave him a wealth of knowledge and insight into a variety of subjects. An added motivation to learn was provided by his isolation. The super mutants kept him locked in the recovery room for over two centuries; the terminal was the only thing that kept him from going insane. In fact, it is from the history books contained within that Fawkes took his name, from a man willing to fight and die for his beliefs. However, the super mutants recently realized that the terminal was keeping him sane and destroyed it to torment him.[6][7][8][9]

A series of unused holotapes that were meant to be found in Vault 87 shed possible light on the identity of Fawkes. These unused assets take the form of diary entrees and progress over an unspecified amount of time. Although Fawkes shares the same voice as most of the Fallout 3's super mutants, he is explicitly defined within the game's dialogue files as being the speaker in the final recording.

Though nothing is left to document why these recordings were not included in the final version of the game, Fawkes' demonstrated intelligence does not appear to be present in the fifth holotape recording; this is consistent with his statement that he had to work to become as intelligent and well-spoken again as he was at the time of meeting the Lone Wanderer.

Security officer Shelton Delacroix began to record a personal diary at the behest of the staff of Vault 87. He was glad to have been assigned to one of the newer Vaults, and that he was guarding the laboratory level rather then the reactor room.[10] It was not long in his duties that strange noises coming from the experimentation chambers began to make their way to his post. When he asked about the noise he was told that it was the animals they were testing on. Out of morbid curiosity, and boredom of pacing back and forth down the hallway, he wondered what exactly they were doing to them, and decided to investigate further.[11]

One day two of his fellow security staff, Sykes and Cossler, dragged an unconscious man from the dorms into the labs. When he asked them what for they glared at him, angry at him for getting involved in something that he didn't have authority to. They warned him not to tell anyone what he saw, or else, with Sykes patting his 10mm. When they left he snuck into the containment room and was shocked at the deformed thing that had once been a man. His organs on the surface of his body, as if they were trying to push through his now green and brown skin. The horrible stench emanating in the room caused him to stagger out into the hallway, coming to the realization that the monster he saw was one of the missing people. Having no other outlet for his horror he recorded it in his logs, this an action that would be his undoing.[12]

Upon finding one of his older recordings, Delacroix became a wanted man. A friend in security warned him to run before they grabbed him, he ran away and hid in the reactor level. With the realization that he had no where to run, nor anyone to turn to he recorded what would be his last thoughts about his wife in Dorm E that he loved her, just as security captured him.[13] Afterward, he would be mutated into a super mutant, now with no memory of who or what he was. He managed to record one final recording, before destroying his recorder.[14]

Fawkes lives in Isolation Room 05, a cell in Vault 87. Should he find a way out, he will be at the Museum of History inside the lobby and right outside of Raven Rock after the quest The American Dream. If Broken Steel is installed, after activating Project Purity, he can generally be found either in the room with Sawbones or in the Jefferson Memorial.

Fawkes is limited in the weapons he can use, and will only equip weapons from the following list. He will not equip any unique versions of the weapons below, including:

Fawkes appears only in Fallout 3. 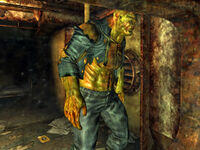 Fawkes still in his cell

Ending slides of Fawkes activating Project Purity during Take it Back!