Fallout 4
“The Fat Man is perhaps the most devastating infantry weapon ever unleashed upon the modern battlefield - a hand-held catapult that launches portable nuclear bombs.”— VDSG Catalogue No.9716

First entering service in September 2077 with the U.S. Army, the Fat Man is a shoulder-mounted mini nuke launcher. The variant appearing in Fallout 4 has a slightly different appearance than in previous games. There is no longer a handle on the right side of the launcher, and instead two straight handles on the bottom. It also appears to be larger, with a rusted silver paint job.

Developers struggled to find a way to fire the heavy ammunition from a man-portable system far enough to keep the operator outside the blast radius, losing a lot of people in the process. Eventually, it was discovered that by placing a small sub-charge into the ammunition itself, similar to bullets being fired from a gun (or perhaps more accurately described as being along the lines of a recoilless launcher), the warheads could be launched a considerable distance without adding too much weight to the already heavy weapon.

The Fat Man fires in a parabolic arc, with mini nukes being launched approximately 20 yards before impact when held level to the ground on even terrain, requiring it to be angled upward for any distance outside of this range. When fitted with the MIRV launcher, it fires six mini nukes in a cluster that separates in mid-air, drastically reducing its range, but increasing its overall damage and area of effect.

"Fat Man" is the codename for the type of nuclear bomb that was detonated over the Japanese city of Nagasaki by the United States on 9 August 1945.

Gunner holding the weapon on the Bradberton overpass 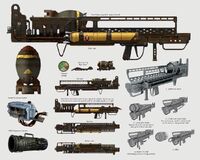