See table
“Try our sausages. They're to die for. Ha ha.”— Master of Ceremonies

The Fasnacht skull mask and Fasnacht green skull mask are pieces of headwear in the Fallout 76 update Wild Appalachia.

A papier-mâché mask depicting a frightening skull in a hood.

It may be received as a rare reward for completing Fasnacht Day. 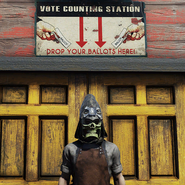 Fasnacht mask as seen in game 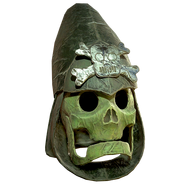