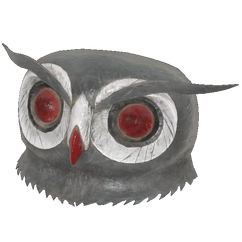 “Don't fly away just yet! Fasnacht is coming!”— Master of Ceremonies

The Fasnacht owl mask and Fasnacht blue owl mask are pieces of headwear in the Fallout 76 update Wild Appalachia.

A papier-mâché mask in the shape of an owl's head. It is predominantly gray and has bright red eyes with white circles surrounding them.

It may be received as a reward for completing Fasnacht Day.

Fastnacht is an annual carnival celebrated by Swiss and German people while traditionally wearing masks that represent demons, jesters, witches and animals. In Helvetia, West Virginia it is normally celebrated once per year on the first weekend after Fat Tuesday,[1] and concludes with the burning of an effigy in a bonfire, without any robots or megasloths.[2]

Retrieved from "https://fallout.fandom.com/wiki/Fasnacht_owl_mask?oldid=3471160"
Community content is available under CC-BY-SA unless otherwise noted.