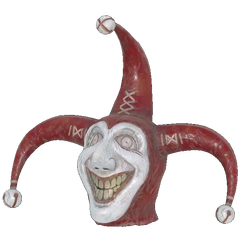 “I suppose you think you're very funny.”— Master of Ceremonies

A papier-mâché mask depicting a medieval jester with a sinister smile.

It may be received as an uncommon reward for completing Fasnacht Day.