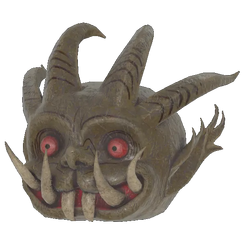 “Something tells me you like fire, so stick around for Fasnacht! We'll have plenty!”— Master of Ceremonies

A papier-mâché mask depicting a devilish goblin with a toothy grin and burning eyes.

It may be received as an uncommon reward for completing Fasnacht Day.

Retrieved from "https://fallout.fandom.com/wiki/Fasnacht_goblin_mask?oldid=3471161"
Community content is available under CC-BY-SA unless otherwise noted.