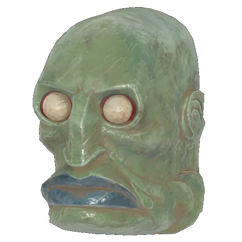 “You're looking a little green in the gills, ha ha!”— Master of Ceremonies

The Fasnacht giant mask and Fasnacht red giant mask are pieces of headwear in the Fallout 76 update Wild Appalachia.

A papier-mâché mask depicting a hideous creature with blank, white eyes and swollen, blue lips. It appears to have gills along its neck.

The standard mask has a 10% chance to be received for completing the seasonal Fasnacht Day event with 1-4 bots kept alive). It has a 4.75% chance if all 5 bots are kept alive.

Retrieved from "https://fallout.fandom.com/wiki/Fasnacht_giant_mask?oldid=3471157"
Community content is available under CC-BY-SA unless otherwise noted.