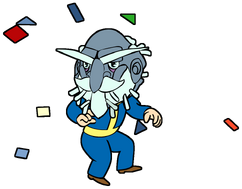 “Chase away Old Man Winter and quicken the coming of spring with the ancient festival of Fasnacht!”— fallout.bethesda.net

Fasnacht Day, otherwise known as Fasnacht Parade, is a seasonal public event in Fallout 76, introduced in the Wild Appalachia update.

To start the event, speak to the Master of Ceremonies in Helvetia at the top of the real-life hour (at XX:00). There's about a 9-10 minute grace period to speak to him before the event is automatically failed if not spoken to beforehand. Once started, the vault dwellers involved in the event must find five of the randomly-assigned Protectron marchers in the town. Each Protectron will provide a task corresponding to their profession, and each task must be completed before the parade can begin. After a task is finished, the relevant marcher will walk to the center of town, equip its Fasnacht mask, and wait for the others to arrive. The possible Protectrons and corresponding tasks are as follows:

Once all five tasks are completed and all five Protectrons assemble in the center of town, the Master of Ceremonies rushes over to join them and take point as parade leader, and the parade begins its route. First, the group walks east down Pickens Rd. to the front of Freyja's Haus, the yellow-painted restaurant, where it is attacked by swarms of radtoads. The Protectrons can sometimes handle these on their own, depending on which ones spawned for the event. After the creatures are eliminated, the group moves north over the wooden bridge toward the Cheese Haus. The marchers stop in the middle of the field as super mutants, mutant hounds, and super mutant suiciders charge the group, with the suiciders being the biggest threat to the Protectrons if they get close enough to damage them when they detonate. Once the mutant assault has stopped, the marchers continue south. Finally, when the parade stops in front of the chapel, hordes of stingwings and wolves attack. A legendary megasloth also spawns near the post office. The enemies spawn and attack when the music played by the Master of Ceremonies abruptly slows and stops before recovering, then repeats once the attack is over and the parade resumes.

After the enemies have been killed, the Fasnacht bonfire must be lit. At least one Protectron marcher needs to be kept alive in order to complete the event, with more survivors netting greater rewards, otherwise, if all five are slain, the quest fails. The participants may also be granted a random legendary weapon or armor piece.

Fasnacht Day's return in 2020 was initially delayed due to a bug introduced with the release of Wastelanders. The event was originally slated to be active from May 25 - June 1, 2020, but a bug prevented small creatures from spawning at normal rates on public servers. Since intestines, dropped by small animals, could not be obtained but were needed for the Gleeful Butcher's parade task, the event could not be completed without prior preparation.

The event was disabled on the morning of May 25, having only briefly been active before being delayed. The issue was not present during the 2019 version of the event and the critters bug was confirmed to have been introduced with Wastelanders.[4] Fasnacht Day was eventually re-enabled without major issue on May 27, with an extension of the festivities until June 9.

Retrieved from "https://fallout.fandom.com/wiki/Fasnacht_Day?oldid=3480871"
Community content is available under CC-BY-SA unless otherwise noted.