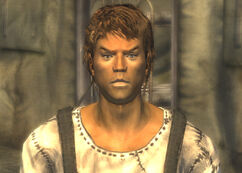 Farris is an injured resident living in the Old Mormon Fort in 2281.

He is one of the three men attacked by NCR soldiers along with Wayne and Roy. The King considers these men friends and wants to know who perpetrated the attack. He will stay asleep on his bed unless attacked or reverse-pick-pocketed; he can then be talked to, but the dialogue only has a "Goodbye" option.

Putting the names of the three men together, you get "Roy Wayne Farris" - the real name of WWE Legend The Honky Tonk Man, who wrestled with an Elvis impersonator gimmick and is also the cousin of Jerry "The King" Lawler.

Retrieved from "https://fallout.fandom.com/wiki/Farris?oldid=3173620"
Community content is available under CC-BY-SA unless otherwise noted.