Farrel has a rodent problem in his garden. Remove the infestation 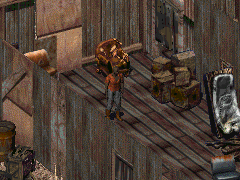 “Well, mostly I putter around in the garden, trying to make those damn plants grow without water. But I can't do that now because something big has moved in and I can't seem to get rid of it.”— Farrel

Farrel has a rodent problem in his garden. Remove the infestation is a quest in Fallout 2.

Farrel can be found at his house in the northern section of Modoc. Ask him what he does and he'll give you the task of cleaning out his garden. You'll be taken there immediately after conversation ends if you accept the challenge.

Note: When you are transported to the farmland area, right where you are standing, there is a rope near a wheelbarrow for you to take.

There are six mole rats and six regular giant rats to dispose of hiding amongst the crops. Be wary, these enemies have poisonous attacks, so they are better dealt with at range. You also need to move quick, as the rats in the southern patch tend to run off-screen if you don't get them quickly. You'll know they're all taken care of when a text float above your character mentions it. Head to the west to leave, then go visit with Farrel once more.

Retrieved from "https://fallout.fandom.com/wiki/Farrel_has_a_rodent_problem_in_his_garden._Remove_the_infestation?oldid=3010415"
Community content is available under CC-BY-SA unless otherwise noted.