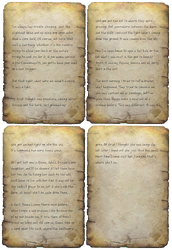 The farmer's note is a paper note in the Fallout 4 Creation Club content "Zetan Arsenal."

On the corpse of a farmer, located west of Graygarden.

I've always had trouble sleeping. Just the slightest noise and my eyes pop open wider than a corn field. Of course, out here that ain't a bad thing. Whether it's the raiders trying to steal your lunch or the muties trying to cook you for it, if you wanna survive in the Commonwealth, you gotta have your mind on a hair trigger.

But that night, what woke me wasn't a noise. It was a light.

My first thought was poachers, coming after Bessie and the herd. So I grabbed my shotgun and ran out to where they were grazing. But somewhere between the farm and the field, I noticed the light wasn't coming from the ground. It was coming from the sky.

Now I've been known to spin a tall tale or two, but what I saw next is the god to honest truth. It was my Bessie, hooves and all, forty feet in the air!

The next morning, I tried to tell a trader what happened. They tried to convince me she was carried off by bloodbugs, but I've seen them things make a meal out of a brahmin before. This was different. It was like she got sucked right up into the sky.
It's happened two more times since.

All I got left now is Emma. She's Bessie's only daughter, and I'll be damned if I let them have her too. So I'm taking her back to the wild, back home to live with her kind. It may not be the safest place to be, but if she's off the farm, at least she'll be safe from them.

In fact, Emma's been there once before. When I rope a wild brahmin, I like to have one of my own beside me. It lets them all know I treat my herd well. Of course, Emma took up a spot near the back, where the hubflowers grow. At first I thought she was being shy, but later I found out she just liked the smell. Next time I come visit her, I imagine that's where she'll be.

Retrieved from "https://fallout.fandom.com/wiki/Farmer%27s_note?oldid=3399105"
Community content is available under CC-BY-SA unless otherwise noted.