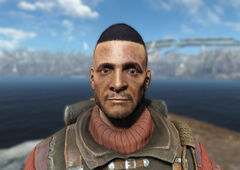 Scribe Faris is a deceased member of the Brotherhood of Steel found at the Revere satellite array in 2287.

Faris was a member of Recon Squad Artemis, which was sent to the Commonwealth years prior to the start of the game. After losing Knight Varham and Knight Astlin in multiple skirmishes, he ended up at the satellite array, where he lost his life to a bullet wound in the leg, bleeding out.

Although the cause of death was blood loss, there is no blood on the body or the surrounding area.

Scribe Faris appears only in Fallout 4.

Retrieved from "https://fallout.fandom.com/wiki/Faris?oldid=3178367"
Community content is available under CC-BY-SA unless otherwise noted.