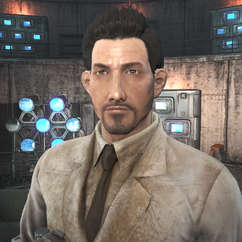 Where You Belong
Acadian Ideals
Data Recovery
The Price of Memory

“Well, if you're determined to help, there is something you can do... It's likely somewhat dangerous, though, so I understand if you'd rather not.”

Faraday is a synth and trusted assistant of DiMA living in Acadia in 2287.

Faraday has been working with DiMA for many years, and helped him substantially in establishing Acadia. Nowadays he's mostly busy with maintaining the computers used for storing DiMA's memories and fixing technical problems, as well as maintaining DiMA's personal equipment and the fog condensers. Judging from comments about him in Cog's journal and some of his own dialogue, it is implied that Faraday has romantic feelings for DiMA.

In the quest The Price of Memory, it is revealed that Faraday was responsible for the imperfect mind wipe of Jule following a nearly fatal boating accident, which is still a source of distress for him as he questions whether or not he made the right choice in saving her at the price of her original identity.

Faraday appears only in the Fallout 4 add-on Far Harbor.

The name Faraday is a reference to Michael Faraday, a British scientist known for his work with electricity.

If DiMA is killed by the people of Far Harbor before the completion of Acadian Ideals and Data Recovery, then Faraday will only respond to the player character with two lines of dialogue, making both quests impossible to complete.[verified]

Retrieved from "https://fallout.fandom.com/wiki/Faraday?oldid=3292772"
Community content is available under CC-BY-SA unless otherwise noted.