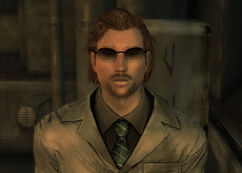 “I'm in charge. This whole operation depends on me. No Fantastic, no power. Got the whole NCR suckling my teats, and it feels so good.”

Fantastic is a man working at HELIOS One as a technician for the NCR in 2281. It is obvious, however, that his technical expertise is severely lacking and is merely using the position as a way to fuel his drug addiction.

An immature and egotistical con artist, Fantastic was recruited by the NCR because they required technical experts to work on the HELIOS One power plant. When the Courier asks Fantastic how he got the job, he confidently replies, "they asked me how well I understood theoretical physics. I said I had a theoretical degree in physics. They said welcome aboard." This was enough to satisfy the NCR recruiters, and he was given the job.

Since arriving at Helios One, Fantastic, through his incompetence and full of himself attitude, has done nothing to repair Helios One. However, he's been instilling the belief that he's essential to the operations at Helios One in order to keep from being fired and to gain as much money from the NCR as possible to fuel his drug addiction.[1] Though a few have seen through his lies for the idiot he really is.[2]

Even though Fantastic has accomplished very little in his time at Helios, he has properly identified a couple of problems that he has yet to fix, like the outside mirrors being aligned improperly. For months he has been working on a single console, assuming that the biggest console is the most important, which, unbeknownst to him, is the console for the Helios' intercom system.[3]

He works in the control room alongside Ignacio Rivas. Ignacio is shown through dialogue to be far more knowledgeable about HELIOS One, but Fantastic manages the plant and doesn't listen to Ignacio's ideas. He continues to maintain the plant's output at "one percent efficiency." This is advantageous for Rivas as he has been purposely keeping Fantastic - and by extension the NCR - in the dark in order to protect information on Helios One. If the plant is run with total inefficiency then its true purpose, ARCHIMEDES II, can be safely kept secret from the NCR.

Full of himself to a fault,[4] Fantastic believes in nothing but his own self-interest and benefit and has no qualms about weaseling his way into a position he's untrained for. He truly believes (or has deluded himself into believing) he could fix Helios One without any technical expertise.[5]

This alone would make him a shrewd character to deal with, but Fantastic is fantastically bereft of intelligence which exposes him as a fraud to anyone who has to spend even a couple of minutes around him. Other NCR soldiers and Ignacio Rivas have little respect for him. When asked to elaborate on his working environment, his explanation starts promisingly enough, noting "that console there controls the main power grid," but soon devolves, ending with, "that slot over there makes sparks when you put stuff in it." If told that he doesn't know what he's doing, he disagrees and insists that he knows exactly what he is doing, he just doesn't know what effect it will have.

Fantastic is also a frequent drug user, solely using his position to further fuel his drug addiction. He often uses his drug addiction as a sympathy plea to guilt anyone calling him out.[1] Further adding to Fantastic's depravity, should the Courier kill all the NCR on the base, Fantastic joins Caesar's Legion when they push forward, occupying the location. He will be wearing legionary armor amidst the other Legion members.[6] Nearby is Ignacio Rivas, who is deceased. When inquiring about Ignacio, Fantastic says doesn't know what happened to him, or if he is personally responsible or not.[7]

* If the Courier kills the NCR troopers by activating Archimedes I.

Fantastic appears in the Second Battle of Hoover Dam but does not do anything during the fighting.

Retrieved from "https://fallout.fandom.com/wiki/Fantastic?oldid=3302139"
Community content is available under CC-BY-SA unless otherwise noted.