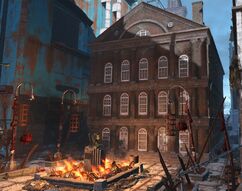 Faneuil Hall, nicknamed the "Cradle of Liberty," is a location in the Commonwealth in 2287.[1][2][3] It is a historic landmark of the Financial District of Boston.

The British Colonial and Revolutionary age

After the project of erecting a public market house in Boston had been discussed for some years, French merchant Peter Faneuil offered at a public meeting in 1740 to build a suitable edifice at his own cost as a gift to the town. There was strong opposition to market houses, and although a vote of thanks was passed unanimously, his offer was accepted by a majority of seven. Funded in part by profits from slave trading, the building was begun in Dock Square in September 1740. It was built by artist John Smybert from 1740 to 1742 in the style of an English country market, with an open ground floor serving as the market house, and an assembly room above. Topping the cupola was the gilded grasshopper weather vane created by Deacon Shem Drowne.[4]

Donated to the city of Boston in 1742, Faneuil Hall fulfilled its role as a commercial hub in colonial Massachusetts. The structure received damage in the 1755 Cape Ann earthquake, which was repaired along with the weather vane.[5] In 1761 the hall was destroyed by fire, leaving nothing but the brick walls; it was rebuilt by the town in 1762.

Faneuil Hall also played a notable role in the American Revolution. Protests against the British Sugar and Stamp Acts that began here led to the doctrine of "no taxation without representation." Later, meetings were held here that culminated in the Boston Tea Party. Many of the Founding Fathers met or gave speeches here (notably Samuel Adams), leading to the building's nickname, "the Cradle of Liberty."[1][2][3][6] In 1775, during the British occupation of Boston, it was used for a theater.[4]

Expansion and the following centuries

In 1806, the hall was greatly expanded by Charles Bulfinch, doubling its height and width and adding a third floor. Four new bays were added to make seven in all, the open arcades were enclosed, several galleries were added around the assembly hall, and the cupola was moved to the opposite end of the building. Faneuil Hall was later entirely rebuilt of noncombustible materials in 1898–1899.[4]

As time marched on, Faneuil Hall had become the civic heart of Boston for the next three centuries. The meeting hall had hosted speakers and debates from the first patriots to modern presidents, and Faneuil Marketplace was an oasis of commerce in the center of Boston's Financial District. This historic landmark became part of the Freedom Trail,[7] and governed over by the Freedom Society.

At the Freedom Society's September 2077 meeting, they discussed the motion to consider merchants' proposals for Protectrons to secure the Faneuil Hall marketplace from petty thieves. Objections were raised on historic preservation grounds and the motion failed unanimously.[8] However, sales noticeably dropped the week of August 8 and the shoplifting continued. They all agreed to take a more detailed approach to their inventory to verify the thefts.[9] It was the week of August 15 that their real problems surfaced. Despite sales being up by 11% due to the Columbus Day holiday, the merchants' inventory report showed net losses of $2,294 for the week, with twelve confirmed shoplifting incidents. Several merchants threatened to sue for breach of contract over security issues, and Fallon's prepared to withdraw immediately.[10] With the pressure building, the mayor of Boston insisted that the Protectron installation proceeds despite objections. By this time the society, whose representatives shrank from fourteen to eleven, also had to allocate funds for roof repairs.[11]

As the week moved forward, a massacre occurred at the building. The Protectrons that were installed killed seven people, including five alleged shoplifters, one bystander, and one Fallon's cashier. A public relations nightmare followed, and sales dropped 81%. To avoid further media scrutiny, the Society canceled further weekly merchants' meetings.[12]

The Great War saw to it that the roof repairs were never completed, and the building remained relatively intact for the next two centuries. By October 2287, however, the place became a super mutant encampment.[6] They tore the place apart and burned most of the meeting hall chairs in two bonfires: one in the center of the hall, the other around the remains of the Samuel Adams statue. However, this did not dissuade detective and treasure hunter Marty Bullfinch from braving the dangers in an attempt to solve the case of The Gilded Grasshopper. His former partner, Nick Valentine, and Nick's new partner, the Sole Survivor can choose to track him down and solve the case.[13]

The building seems to be intact on the outside. However, both the surrounding area and the inside are completely overrun by super mutants. On the front plaza is a large fire surrounding the destroyed statue, with metal spikes in the foundation itself. There are at least four super mutants; including one super mutant suicider patrolling the premises. Two doors at the front and back grant access to the building. Nearby are the unique wooden, vine-covered arches of Christopher Columbus Park. A plaque can be found which says:

“Donated to the city of Boston in 1742 by French merchant Peter Faneuil, Faneuil Hall was a commercial hub in colonial Massachusetts. It played a notable role in the American Revolution. Protests against the British Sugar and Stamp Acts that began here led to the doctrine of "no taxation without representation." Later meetings were held here which culminated in the Boston Tea Party. Many of the Founding Fathers met here or gave speeches here (notably Samuel Adams) leading to the building’s nickname, "The Cradle of Liberty."”

Three Protectrons can be activated via a terminal upon entry from the front of the building (The terminal is to the right of the entrance, behind the trash can). Upon the roof, the Sole Survivor can start the quest The Gilded Grasshopper (if not previously started at the Valentine Detective Agency, via the Detective Case Files quest) after reading the note inside the grasshopper. It can be found on the tip of the weather vane atop the golden dome next to the ruined bell tower.

When at this location, companions make comments, which are activated in the main hall.

Faneuil Hall appears only in Fallout 4.

Faneuil Hall is based on the real world location of Faneuil Hall, a stop along the Freedom Trail in Boston, Massachusettes.

Marketplace in the downstairs hall

The gilded grasshopper on top of the building

Faneuil Hall plaque
Add a photo to this gallery

Retrieved from "https://fallout.fandom.com/wiki/Faneuil_Hall?oldid=3450130"
Community content is available under CC-BY-SA unless otherwise noted.