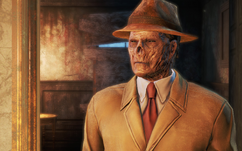 The Vault-Tec rep in Hotel Rexford

Vault-Tec rep as a settler

Familiar Faces is an unmarked quest in Fallout 4.

If the player character heads to Hotel Rexford and goes up the stairs, they will find the Vault-Tec rep, who is now a ghoul. When the player character talks to him, he will immediately recognize them. It turns out that because his name was not on the list to get into Vault 111, he had to suffer through radiation, turning him into a ghoul.

Once the Sole Survivor travels back to Sanctuary Hills and speaks to the Vault-Tec rep, he will exclaim that they did come to visit him and will end the dialogue. From this point on he can be assigned to any unlocked settlement, and, if there is an open level 4 trading emporium, he can then be assigned to it.

If the Sole Survivor decides to go on a date with Magnolia during the quest Emogene Takes a Lover, one may encounter the Vault-Tec rep after waking up.

Retrieved from "https://fallout.fandom.com/wiki/Familiar_Faces?oldid=3480271"
Community content is available under CC-BY-SA unless otherwise noted.