Falls Church is a location in the Washington, D.C. area, south of Grayditch.

This avenue is oriented east to west and intersects Mizin Street and Fairford Drive. Major landmarks on this avenue are the Falls Church Metro, L.O.B. Enterprises and a super mutant camp. The avenue also features two mail dropboxes.

The super mutant camp is located in a heavily destroyed school. Most of the first floor and portions of the second floor are patrolled by four or five of the mutants. They are able to walk the second floor by means of plank bridges which close the gaps between support pillars. These abominations have nearly unlimited views of the surrounding terrain, and can easily spot any intruders from a distance. There is also a Nuka-Cola vending machine. Outside and to the west of the school is a children's playground.

This drive is oriented north to south and intersects Basile Avenue. The major landmarks on the drive are L.O.B. Enterprises at 18527 Fairford Drive and the super mutant camp. Most of the road past this building has been destroyed. A bus stop for the City Liner service and a fire hydrant is located adjacent to the camp.

This street is oriented north to south and intersects Basile Avenue. This street ends abruptly at a children's playground. Two major landmarks on this street are the Falls Church Metro, one of the few Metro stations to be built above the ground, and the super mutant camp. Adjacent to the camp, there is a mail dropbox.

This boulevard starts north of a courtyard, and curves to the west under a pedestrian bridge. Major landmarks on this boulevard are the Falls Church/Mason Dst Metro and an office building.

Falls Church appears only in Fallout 3. 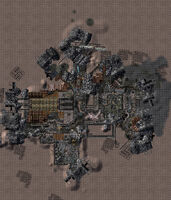