The Fallout intro begins with the song "Maybe" by The Ink Spots and a screen of a Radiation King television set showing a Vault Tec ad for Vault 13, featuring the Vault Boy watering plants and waving at the camera as the Vault blast door closes, followed by the "Vault of the Future" picture. Next, a Galaxy News Network (GNN) program starts, stating that "Our dedicated boys keep the peace in newly annexed Canada" and showing two American soldiers in power armor executing a Canadian insurgent and waving at the camera. Then a power armored soldier is shown in front of the American flag with 13 stars and a war bond ad. Next, ads for Chryslus Corvega and Mister Handy appear. The TV shuts down and the music fades, as the camera shows us ruins of a city. The city happens to be the futuristic Bakersfield now Necropolis as evidenced by the outro movie's picture of Necropolis.

After the cinematic intro, a series of still photographs with a narration by Ron Perlman follows.

The Romans waged war to gather slaves and wealth. Spain built an empire from its lust for gold and territory. Hitler shaped a battered Germany into an economic superpower.

In the 21st century, war was still waged over the resources that could be acquired. Only this time, the spoils of war were also its weapons: Petroleum and Uranium. For these resources, China would invade Alaska, the US would annex Canada, and the European Commonwealth would dissolve into quarreling, bickering nation-states, bent on controlling the last remaining resources on Earth.

In 2077, the storm of world war had come again. In two brief hours, most of the planet was reduced to cinders. And from the ashes of nuclear devastation, a new civilization would struggle to arise.

A few were able to reach the relative safety of the large underground Vaults. Your family was part of that group that entered Vault Thirteen. Imprisoned safely behind the large Vault door, under a mountain of stone, a generation has lived without knowledge of the outside world.

Life in the Vault is about to change.”— Ron Perlman, Fallout intro

The juxtaposition of the short-lived television feed containing echoes of pre-War programming and the ruined Bakersfield serve as a storytelling device, introducing Ron Perlman's subsequent narration. The short CGI sequence speaks volumes of the Fallout world. The Vault-Tec advertisement introduces nuclear war and indicates that citizens were not only aware of the looming threat, but were also encouraged to secure their future underground, should the holocaust come.

The next scene provides context - the GNN newscast and the tone it's kept in portray a drastically different American society from the one we know. The average US citizen watching GNN is a fiercely nationalist xenophobe, who doesn't particularly care about the welfare of other countries or their citizens, long as his country's best interests are protected. The patriotic image of a T-51b trooper in front of a flag and the following PSA about war bonds serve a dual purpose: they establish that not only is the American citizen different, but the country is too, instead of 50 states, there are 13 Commonwealths, and that USA is not only occupying annexed Canada, but it's also engaged in a war with another country. Coupled with the Vault ad, this short sequence establishes that it was America's aggressive war mongering that brought nuclear devastation upon itself, and it certainly wasn't disappointed.

The last two advertisements also introduce the player to the retro-futuristic aesthetic and the technological level of the world of Fallout, where electronics are rare and bulky, but nonetheless, great advances were made. Finally, the TV cutting off in the finale as Bakersfield comes into view is a simple, but powerful message - the world and society as we know it has come to an end; pre-War America is not coming back.

Then the narration takes place, which is a straightforward storytelling device that glues together what was presented in the introductory animation, and completes the immersion of the player into the world of Fallout. 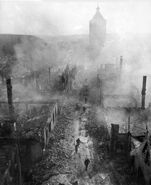 Retrieved from "https://fallout.fandom.com/wiki/Fallout_intro?oldid=2745171"
Community content is available under CC-BY-SA unless otherwise noted.