Fallout Trilogy is a compilation of the first three games in the Fallout series. It contains Fallout, Fallout 2 and Fallout Tactics: Brotherhood of Steel.

Other names for this compilation as released internationally include Fallout Collection (White Label, UK), Saga Fallout (CD Projekt, Poland) and Антология Fallout. Коллекция классики (1C, Russia). It has been released as Fallout Trilogy in several other countries as well.

Fallout, Fallout 2 and Fallout Tactics can also be bought separately as a digital download in some stores, GOG.com was such one.

In September 2009, Bethesda Softworks sued Interplay for trademark infringement, partly in relation to the Fallout Trilogy pack. According to Bethesda, the licensing contract requires all advertising, packaging and other promotional material to be sent to them for approval first, which, according to the lawsuit, was never done by Interplay regarding neither the Fallout Trilogy pack, nor any of the releases through Good Old Games, Steam and other digital distribution platforms. Bethesda also claims that the name Trilogy constitutes unfair competition, since it suggests that the pack includes Bethesda's own Fallout 3. Interplay argues that there were previous releases of this pack under the same name, and thus the new edition does not violate the Asset Purchase Agreement.

The disc contains not only three Fallout games, but also some bonus content. It contains artwork such as animated GIF's and illustrations, videos, manuals, patches, and more.

The latest patches for Fallout and Fallout 2 are included on this compilation's DVD. However, to fix some compatibility issues, Interplay released a new, additional Fallout Tactics Direct Sound patch on May 12, 2009. 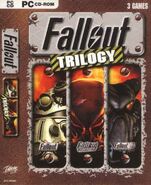 Contents of the first Polish edition 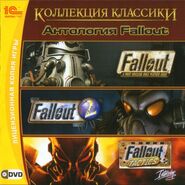