In contrast with previous titles, the Fallout Tactics intro contains a slightly different Interplay logo. Interplay's GNN logo plays as usual, but instead of the standard jingle, the background is composed of fragments of audio related to American military history and those specific to the Fallout world.

This intro narration is read by Ron Perlman.

“War, war never changes. It was the inevitable result of the path humanity had chosen. Everyone who entered into the conflict expected victory. Everyone was optimistic. But as the hostilities escalated, optimism faded and society began to collapse.

The great Vaults were built to house the wealthy, the powerful, the influential and those deemed necessary to their survival. Inside resources and technology were stockpiled, a final defense against the coming holocaust. With the past behind them and the present destroyed. They looked to the future.

The sturdy Vault 0 was to be the nucleus of the vault network housing the greatest leaders, artists and scientists. The inhabitants of Vault 0 were to reunite the vaults and lead the people to a new life, a new world. But after the bombs, the world would be a harsh one. To ensure the creation of a post-nuclear utopia, the vault dwellers would need help. Machinery was constructed to tame a land hardened by the ravages of war, then tempered by nuclear winter. But plans were barely in place when the first missiles left the silos. During the destruction, communication between the vaults ceased. Entire vaults were lost; those that survived were on their own.

Not all vaults succumbed to the machinations of war. On North America`s west coast, one group of military vault dwellers emerged almost unscathed. They surveyed the wasteland and squared their shoulders for the task ahead. These dedicated survivors salvaged the technology from the vaults, technology that was studied, replicated and fiercely guarded. For they knew that while their power came from numbers, their future lay in scientific knowledge. In time, they formed the Brotherhood of Steel.

The brotherhood used their knowledge to drive back the atrocities of the wasteland. Proclaiming themselves "The Technological Saviors of Mankind". They scoured the land in search of more technology, raiding mutant camps, bandit towns and the broken remains of other vaults. But even they could not keep pace with the high tolls demanded by life in the wasteland.

The Brotherhood found themselves at odds with their need for new blood versus their code of technological secrecy. The debate was lengthy. Finally, the elders ruled against sharing the technology with outsiders, convinced that they would endure as they had before. Further discussion was discouraged and the elders ordered the minority on a mission across the wastes. Super mutants, the foot soldiers of a conquered army had been forced into retreat across the mountainous barrier to the east. The Brotherhood constructed airships and dispatched the minority to track down and assess the extent of the remaining super mutant threat.

But disaster struck while crossing the great mountains. A great storm broke the main airship and flung it far from its course. The mighty ship was badly damaged. The smaller sections were torn from the main craft, never to be seen again. Many of the expedition`s leaders were lost to the winds. The fraction of the crew that still survived, struggled to keep their ship aloft before finally crashing on the outskirts of a once thriving metropolis. A city once called "Chicago". Broken, scattered and scarred. They took stock of the situation and once again squared their shoulders to the task ahead. The Brotherhood had much to offer to the surrounding villages. They traded advanced medicines in exchange for food and labor. They traded protection from bandits in exchange for new recruits. In time, their ranks began to swell.

Separated by distance and ideology from the main Brotherhood forces. The minority was free to forge a new "Brotherhood of Steel". One that reflected the ideals they had strived for all along. However, one's future in the wasteland is never certain. For an old power has awakened, also bent on making this land its own. Life in the Brotherhood is about to change.” 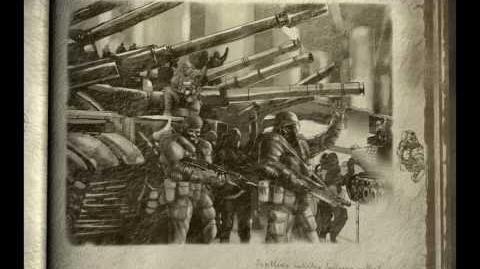 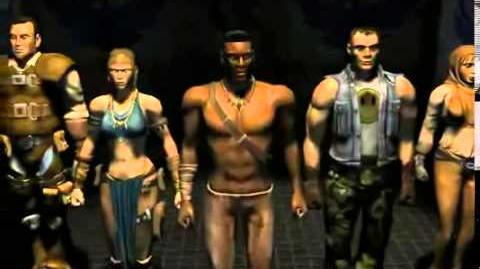 Fallout Tactics intro
Add an image to this gallery

Retrieved from "https://fallout.fandom.com/wiki/Fallout_Tactics_intro?oldid=3171692"
Community content is available under CC-BY-SA unless otherwise noted.