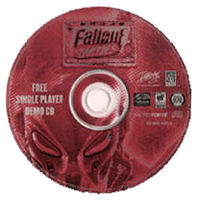 The single-player demo includes four training missions and two missions: Dirt Haven and Devil's Graveyard. A squad of Brotherhood Initiates is sent to deal with a raider gang lead by Gargantua.

The multiplayer demo adds a multiplayer component to the two-level single player demo. It supports both Gamespy Arcade and direct TCP/IP. Multiplayer games can be played either in "Assault" or in "Skirmish" mode.