Pre-production started shortly before the release of Fallout Tactics, but it was canceled around December 2001. When the first game did not meet financial expectations, the sequel was canceled by Interplay Entertainment.[citation needed] It never proceeded past the conceptual phase.

The game's introduction would have featured the Midwest Brotherhood of Steel, following the Barnaky ending in the first game, facing off against the Mutant Liberation Army.[1] The Brotherhood would have been broadcasting live one of their raids on a Mutant base.[2]

The game's primary antagonistic force would have focused on an irradiated G.E.C.K. that was creating mutant plants and fungi. The mutant garden begins to spread fairly rapidly, preying upon animal life for fertilizer.[3] The player character is tasked with discovering the source and a way to put an end to it.

Only bits and pieces of the game's premise are known. Concept art by a Micro Forte concept artist included mutant crocodiles, which may have been included.

Fallout: Brotherhood of Steel 2, also canceled, would have incorporated an irradiated Garden of Eden Creation Kit similar to the one in Fallout Tactics 2. 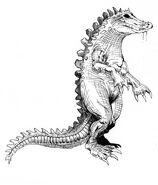