Fallout Shelter: The Board Game is a Fallout-themed board game from Fantasy Flight Games based on the free-to-play mobile game Fallout Shelter. It was written by Andrew Fischer and released in July 2020.

As an officer, you'll have to direct your dwellers to where they'll spend their time in the vault, whether it's spending some time relaxing in the lounge, gathering vital resources like food in the community gardens, or battling a radroach infestation in the game room. 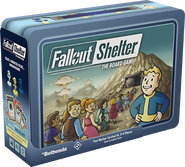 Minis
Add a photo to this gallery

Retrieved from "https://fallout.fandom.com/wiki/Fallout_Shelter:_The_Board_Game?oldid=3404828"
Community content is available under CC-BY-SA unless otherwise noted.