Fallout Shelter is a free-to-play installment in the Fallout series for iOS, Android, Xbox One, PS4, Nintendo Switch, Microsoft Windows, and Tesla Arcade, which was announced at Bethesda's E3 2015 press conference on June 14, 2015. The game was released on the iOS App Store the same day, after the conference ended. The game allows the player to create their own vault and thereby become an overseer of its inhabitants. It is the seventh overall game in the Fallout series.

Fallout Shelter is a simulation game in which the player runs a Vault-Tec Corporation vault as the overseer. As the overseer, one controls all of the vault's functions including: power, food, water and the number of vault dwellers. To advance through the simulation one needs to increase the size of the vault by adding and upgrading new rooms, each with their own function and then adding dwellers to run each room.

Fallout Shelter contains 23 buildable rooms that are unlocked by increasing the number of vault dwellers. All rooms can have a limited number of dwellers assigned to it and each production room requires at least one dweller to run it. Each room built begins at tier one and can be upgraded with caps as far as tier three.

Each room requires a specific SPECIAL skill to run at its maximum efficiency. With production rooms, such as a power generator, it will produce and hold more power when upgraded but will take longer to produce unless more efficient dwellers are assigned there. Rooms can also be merged by placing an identical room next to it.

Merged rooms are larger and take longer to produce supplies and cost more to upgrade, but are also more efficient. Rooms must also be of the same tier level to merge and will merge automatically when built next to each other.

Vault dwellers are an essential part of the game and are required for: operating production rooms, reproducing, protecting the vault from raider and deathclaw attacks and scavenging the wasteland. To increase the vault dweller population, one can wait for them to show up at random, mate two dwellers, get them from lunchboxes, or produce a radio studio.

Each dweller will spawn with only a vault jumpsuit and their fists for a weapon. Basic dwellers start at Level 1 and can be upgraded up to Level 50 through working, preventing hazards and scavenging. Whenever a dweller levels up a number of caps are gained equal to their new level. All dwellers have their own individual S.P.E.C.I.A.L. attributes and are most commonly set between 1 and 3. SPECIAL attributes can also be boosted with SPECIAL rooms such as classrooms or armories.

Vault dwellers can also be acquired with additional levels, attributes, outfits and weapons if acquired through lunchboxes or exploring the wasteland. Many of the dwellers, weapons, outfits, and pets are featured from other Fallout games, most noticeably Fallout 3 and Fallout 4.

One can send up to 25 dwellers to explore the wasteland to obtain extra armor, weapons, and caps. Dwellers will come across locations from Fallout 4 seen in the explorer's update logs. One can direct a dweller through the building to fight, explore and collect items to bring back to the vault. After returning, one can collect all the things discovered by the dweller in the wasteland. One can equip the dweller with stimpaks and RadAway from one's stock at the start of exploration. Also, a dweller will automatically return to the vault if they have collected 100 items.

Lunchboxes are awarded upon completion of certain game objectives and are also available for purchase via micropayments. Each lunchbox allows the player to attain five cards, each card then allows players to attain either dwellers, weapons, outfits or resources. Though the in-game description states that "Each lunchbox is guaranteed to either have a dweller or a rare item and a guaranteed junk," +500 caps are also categorized as a rare item. Players could also obtain Common, Rare and/or Legendary dwellers through lunchboxes.

Junks and recipes can be collected from the wasteland or from lunchboxes, which can be used for crafting weapons and outfits via a weapon workshop and outfit workshop. By paying caps and junk, one can assemble items in the workshop. The duration of crafting varies. Some weapons and outfits can only be obtained via crafting. Each item will require different pieces of junk of varying rarity. Recipes may also need to be found to make certain items and better equipment requires rarer junk.

Occasionally the Fallout Shelter version of the Mysterious Stranger jingle will play to signify that the Mysterious Stranger has appeared somewhere in the vault, clicking on him within the short amount of time he is visible for results in a random amount of caps being given, sometimes a very large amount (possibly up to 5286). The vanishing jingle plays when he leaves. If the sound is turned off but vibrations are left on, a double vibration will indicate his arrival and a single vibration will indicate his departure.

If the sound is on, the tone will increase in volume as the screen centers on the Mysterious Stranger. If during the jingle, the player scans across the vault, it's possible to home in on his location via 'sonar'. If the player zooms all the way out (requires HD Zoom Out to be turned off), all dwellers, pets, and the Mysterious Stranger will be in front of all walls and/or obstacles, making it much easier to find him.

During development, the game was codenamed "Underground."[5] According to lead developer Todd Howard, several early designs had been pitched and rejected.[6] On November 5, 2009, John Carmack of Id Software said that, while it was nothing official yet, he had an internal proof of concept made for a Fallout iPhone game. Both Carmack and Bethesda's Todd Howard are fans of the platform and any iPhone game based on Bethesda's IP will likely be made as a joint project between id and Bethesda.[7] Carmack said that he will likely be personally involved in making the game, although currently he is too overloaded with work on other games. "At the very least I'm going to be providing code," he said.[8]

The game was a surprise release on June 14, 2015, during Bethesda's first E3 conference. It was announced at QuakeCon 2015 that the Android version would be released on August 13, 2015.[1] It featured new game updates, including the Mister Handy robot as an all new premium reward. Mister Handy can collect resources, be sent into the wasteland to collect loot, and serve as a defender of the vault against creatures and disasters, including all new deathclaw and mole rat infestations.

The game was made available for PC on July 14, 2016, and at first required the Bethesda.net launcher[9] to play.[10] The game was also made available for Xbox One on February 7, 2017, with cross-platform compatibility between Windows 10 and Xbox One. The biggest new feature for the game was the introduction of achievements, which can be obtained through completing the requirements for the achievement.

The game was released on Steam on March 29, 2017, with the same achievements as the ones that can be found on the Xbox version. Fallout Shelter surpassed 100 million users across phones, tablets, PC and Xbox One on September 14, 2017.[11]

Todd Howard announced at E3 on June 10, 2018, that the game had just been released for PlayStation 4 and Nintendo Switch,[3] making it available on all major consoles at the time. As of June 2019, the game has grossed over $100,000,000.00 in revenue.[12] On June 11, 2018, Fallout Shelter was released on PlayStation 4 and Nintendo Switch, and on May 20, 2020, Fallout Shelter was released on Tesla in-car entertainment system. In 2019, Bethesda announced plans for a "Fallout Shelter Online," which went on a beta testing period limited only to China. The game released further outside China to other Asian and Oceanic nations in 2020.

In 2018, Bethesda Softworks sued Behaviour Interactive and Warner Bros for copyright infringement and breach of contract, claiming that Warner Bros had released a similar Westworld themed game based on pre-release Fallout Shelter code.[5] This copyright infringement included the released Westworld product expressing bugs that were removed prior to Fallout Shelter's release and cite similarities in mechanics, animation and user design.

Dweller returning from the Wasteland with full inventory (100 items)

A Fat Man being used 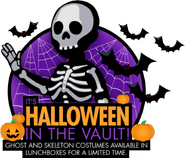 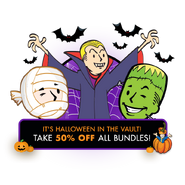 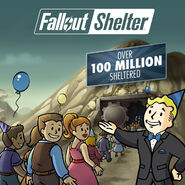 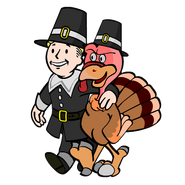 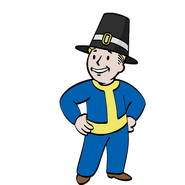 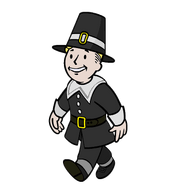 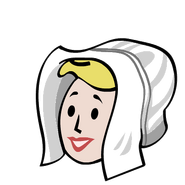 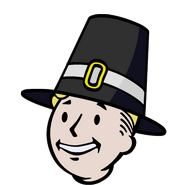 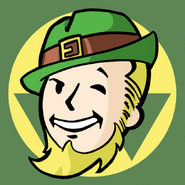 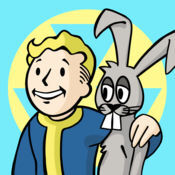 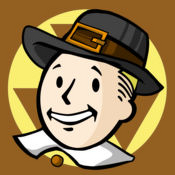 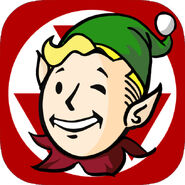 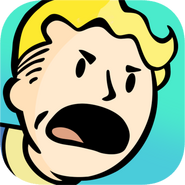 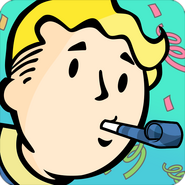 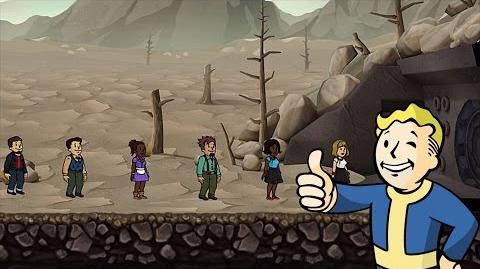 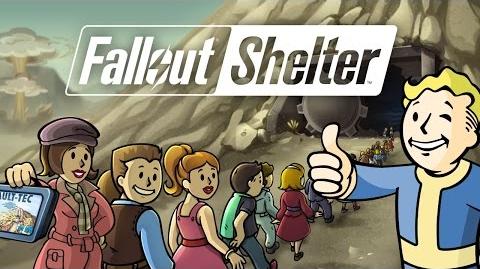 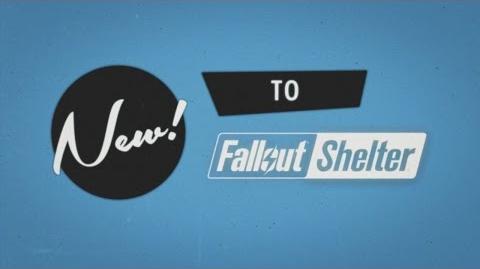 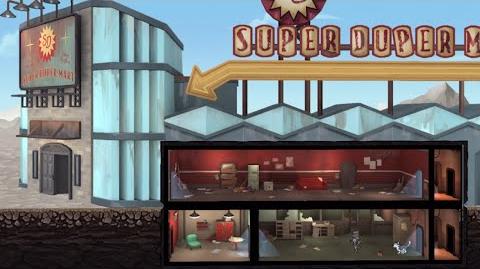 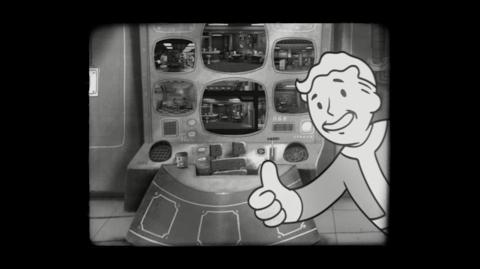 Fallout Shelter - Now Available on Xbox One and Windows 10