.pdf at Duck and Cover

Fallout Bible 7 is the seventh installment of the Fallout Bible, a collection of documents containing background material for the first Fallout games compiled and written by Chris Avellone. This installment was released on July 29, 2002.

All notes in italics come from The Vault editors, not from Chris Avellone himself.

The seven deadly secrets of Fallout

Here's the seventh Fallout Bible update - if you missed any of the others, check the Black Isle main page (www.blackisle.com), scroll down, and click on the "Read More News Here" section (and scroll down or do a "Find" for Fallout). The first three updates have been collected into "Update Zero" and the fourth, fifth, and sixth update stand on their own.

For those of you who haven't seen these before, the Fallout Bible is just a collection of all the background material and hi-jinks from Fallout 1 and Fallout 2 compiled into one document so the fans can take a look at it. Some of the stuff in this update a little rough, or just plain wrong because I forgot about somebody's dialogue or holodisk, so if you see anything wrong or if you think of anything you'd like to see, drop me a line at Cavellone@blackisle.com and I'll see what I can do. I can't promise I'll answer your emails immediately, but I will get around to it, usually when the weekend hits.

This update contains seven deadly secrets of Fallout. They are not the same as sins, but they can be interpreted as such.

Thanks for supporting Fallout,

This update contains the following:

Here's another list of stuff to start the update with. It's almost the same thing as last time, so you can fast forward over this if you're a veteran of these updates.

And within fifteen seconds, someone will post an answer to your problem. The answer will occasionally be snide and sarcastic and may be followed by the words, "silly rabbit" or "dumbass," but you will get your answer. So make your voice heard.

And for any other questions regarding Interplay products, barring hints and tips:

I know I offered a prize on the wonderful world of nuclear winters last time, but I haven't sorted through all the answers yet, mostly because Outlook chose this weekend to start acting screwy. I will at some point, just not now.

Pie in the face section

Welcome to the pie in the face of the section where you get to rub my nose in bad facts. This will most likely be a regular feature.

The whole thing is about one single mistake you made in your Bible (upd.6).

"it's in Russian, I think" RUSSIAN? This is a Polish site, I repeat: P-O-L-I-S-H. Like Poland. If you think it's in Russian, then you haven't seen a Russian letter yet. I am really upset because I'm a patriot and if you ask me what is this country then I'm going to kill you, cut your head off, drown you, hang you then cut you in half and into a million pieces then I will slowly cook you in garlic and spinach sauce! With mint!

OK, now I'm calm (this text above was partially the result of reading the few lines of your bible about letters you will not answer – you have a "lively" style). I suggest you fix this immediately and put the new copy on all official servers. Do I make myself clear? (modified Fallout2 Navarro Enclave Guard speech, I'm sure you've noticed.)

So there's the retraction: Man, you Russians sure are sensitive.

...and now I can't find the stupid document, so I'll have to leave it for another time. There was mention of an easter egg drug, a mad scientist in charge of the installation who was experimenting on people, and a lab protected by a maze filled with mutations and traps.

Here's a few questions. Not many. If I didn't answer yours, it's pending.

1. In case I'm not on your blocked senders list already, I'd have another question for you:

Who's responsible for the exploding Tim Cain animation in the Interface folder of Fallout 1?

Is it actually being used in the game as an easter egg or did just one of the designers waste some expensive development time on it?

Chris Jones, I believe; he was a programmer on F1, F2, Arcanum, and now BIS' Jefferson project - from what I heard, he snuck it in there one day, then Tim noticed it while trying to figure out why the "credits" routine was calling an animation.

2. In the Fallout Bible you have written, then FEV cause ghouls and supermutants sterile but in the F2 in the Broken Hills in the Old Ghouls House (or something like that) lives a son of Set. Set cannot have a son because he's a ghoul, so cause FEV sterile or not? (Or is it only a joke?)

According to designer Colin McComb (who is so tough that [1] he did design on Planescape and [2] lives in Detroit), [[Typhon]] was Set's son before they became ghouls and became sterile and mutated and all gross-looking.

Still, because it was Broken Hills, it's best you simply ignore everything that happened there except for the racism angle and quests, the caravans and Chad, the references to the Unity, and Marcus. There are no talking plants, no old ghoul's home, no treasure hunter, no ghoul getting run over, no scorpion intelligence experiments, etc, etc. Same with some aspects of the Sierra Army Depot (the news holodisk, Skynet's "name," etc, etc) . At some point I'll put together a list of things that are going to be dropped from continuity because they are so painful they make sitting on the can squeezing out a load of superheated plasma seem pleasurable by comparison.

So... Deathclaw evolution. Fallout Tactics had it right because they tapped into the collective unconscious and realized the truth. Or, they may have decided that they needed deathclaws to have hair so they had some way of identifying teams in a multiplayer game. I don't know.

First off, deathclaws pay homage to the "shadowclaws" in Wasteland. They lurk in the mines near the Ranger Base. They are very tough and scary and can make you wet your pants.

In the original Deathclaw concept art done by Scott Campbell (who, among other talents, wrote the story for Fallout 1 and laid out many of the major NPCs and locations), the Deathclaws were to look like this: 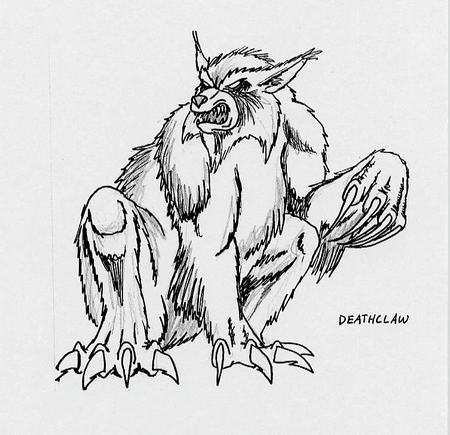 Which is not exactly what they look like now.

Ah, but the Fallout 1 iteration of deathclaws is an even uglier story that reveals the true dark underbelly of development. A filthy, dirty secret, kept in the dark for too long. Now... now the truth must be told.

Once upon a time, someone, somewhere, thought a Forgotten Realms fighting game would be a cool idea. As cosmic Karma would have it, it never happened. Many clay models were made, however, by the talented Scott Rodenheizer, who did many of the heads for Fallout 2. By the way, I have a suspicion that not all the heads done for Fallout were actually "clay," but were actually human heads covered in plaster. But I'll leave that for another update.

If you are so blessed with the following book, please flip through the white-covered 2nd Edition AD&D Monstrous Manual, and amongst the pictures, you will see (perhaps, maybe, coincidentally, nothing concrete admitted) what the Deathclaw was originally intended to be. Time came when Fallout needed a nasty monster, and that model was available. So the Deathclaw's look was born.

If you email me what the critter is first, you go into my growing list of big winners which have been piling up since the nuclear winter question from last time.

So take your deathclaws with hair or take them from the worlds of Dungeons and Dragons. It makes no difference - their origins are what they are.

Another secret: According to Fallout 1 designer, Scott Bennie (who designed some of the central Hub, including Iguana Bob's, Jake's, and parts of the Thieves Guild, as well as the upper floors of the Cathedral), Dogmeat was originally called "Dogshit," and, well...

The Fallout area that never was: The Burrows

For your hot and heavy Fallout 1 behind-the-scenes viewing pleasure, I present some scanned designs of the "Burrows," a location that, along with the Vipers and the Jackals, never made it into Fallout 1. It was designed by Scott Campbell and Brian Freyermuth, so sit back, sip your tea, and enjoy.

And yes, these documents are scanned. Why? Because there's no way I was going to type this stuff out like the Jackals and Vipers in the last update and leave bloody fingerprints all over my keyboard.

The reason for the circled sections below are unknown; I know the FSEF was what West-Tek was called in the original Scott Campbell design documentation, along with Base Omega -> Military Base (I'll try to include Scott Campbell's original Fallout timeline doc in a future update, so you can see the origins of what made it into the final game). You may blame me of this naming terminology if you wish, but it was out of my hands, long ago.

Why didn't the Burrows make it in? Well, according to Tim Cain (obtained through Peter Nelleman/FO-Tank):

Thanks to Tank for digging that up. 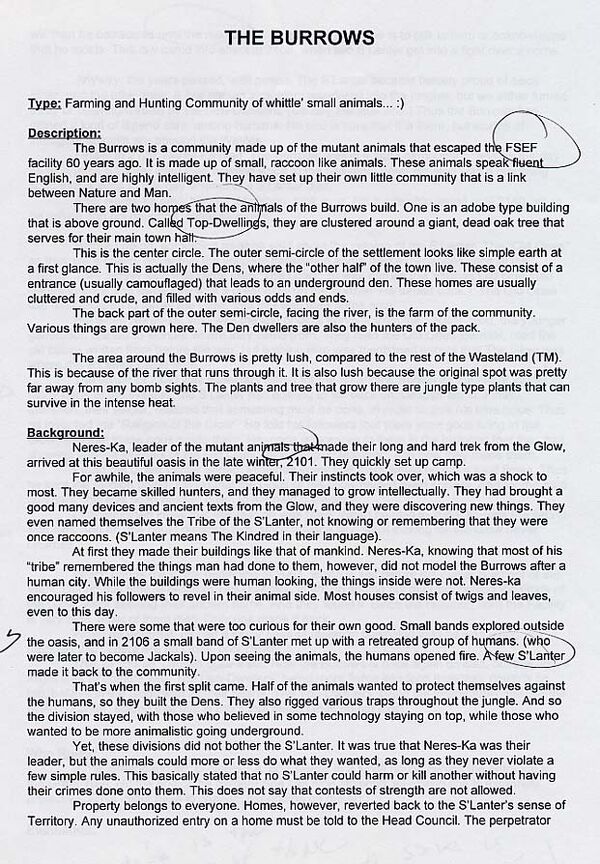 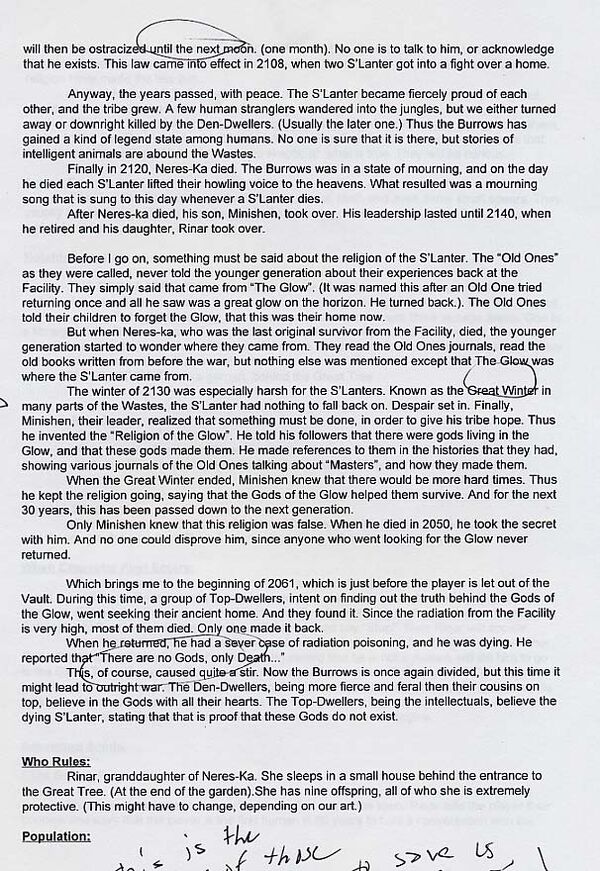 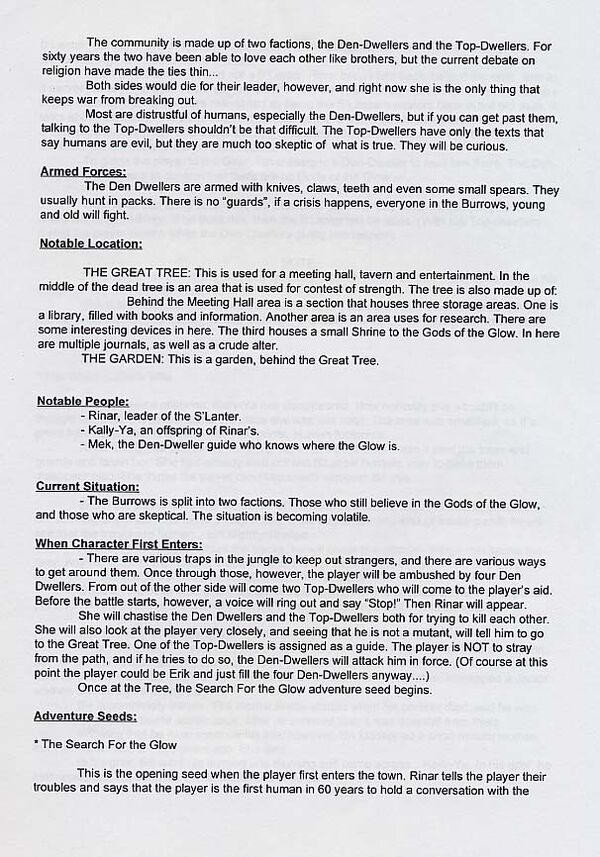 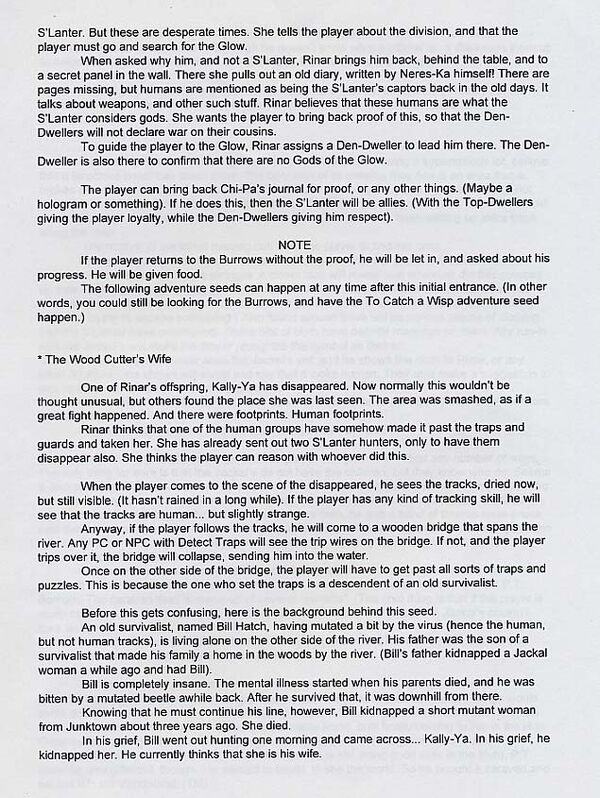 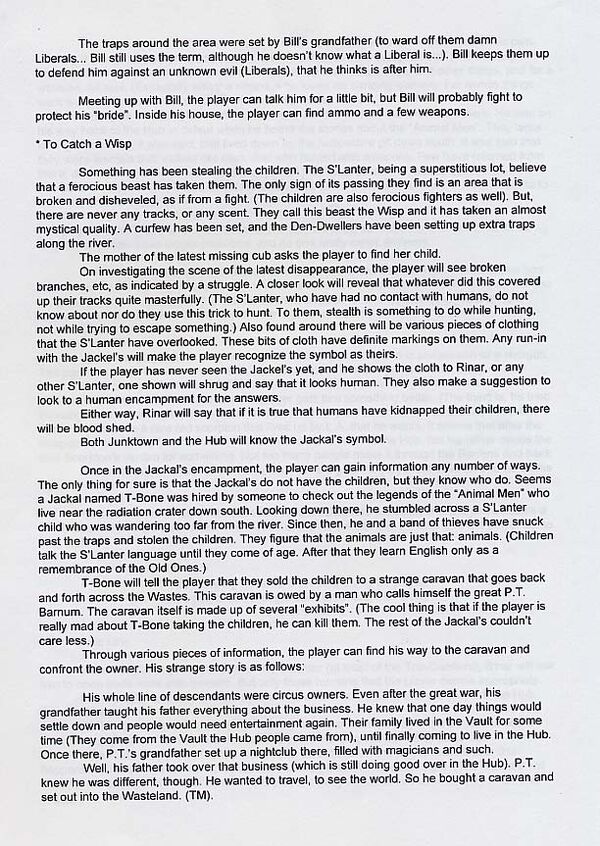 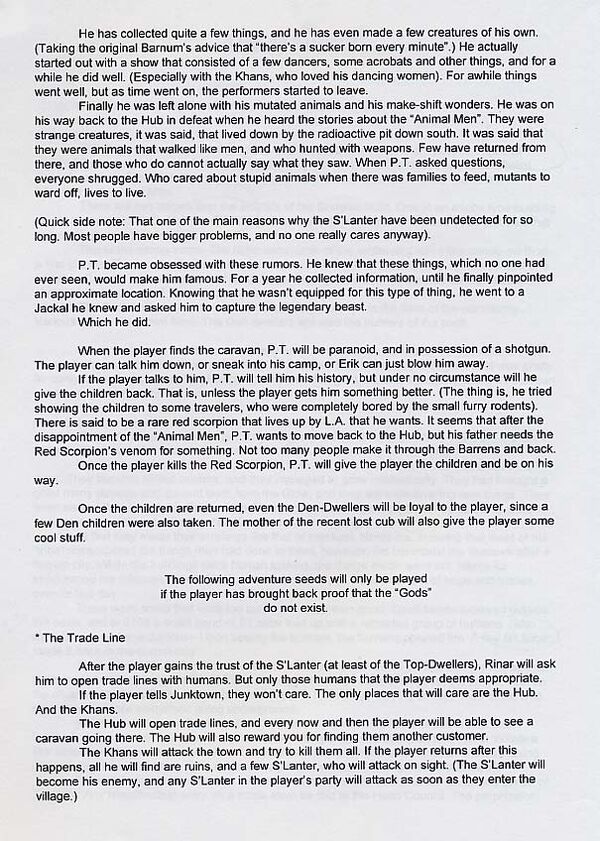 In any event, that's it for update #7. You may debate, flame, or debate-flame me either at the address at the beginning of this update or on the message boards. Email is usually faster... even with Outlook acting all screwy.

Retrieved from "https://fallout.fandom.com/wiki/Fallout_Bible_7?oldid=3232969"
Community content is available under CC-BY-SA unless otherwise noted.