The first Fallout 76 trailer was released by Bethesda Softworks on May 30, 2018.

The trailer begins with a closeup of a Pip-Boy 2000 Mark VI as it turns on and begins playing "Take Me Home, Country Roads," performed by Spank Live and written by Bill Danoff, Taffy Nivert and John Denver. As the camera pans out, it is revealed that the Pip-Boy is set to 6:34 AM on October 27, 2102, and a Vault 76 bedroom is shown. A television shows a conference held outside of Vault 76 before the Great War, explaining the need of the vault to help rebuild after the War. The atrium of Vault 76 is filled with party favors celebrating Reclamation Day. A man in a Vault 76 jumpsuit puts on the Pip-Boy as the narrator states "In Vault 76, our future begins."

Another trailer, featuring real-life actors portraying scenes and locations from the game, was released on October 28, 2018. It opens with a shot of a mega sloth as the Beach Boys' song "Wouldn't It Be Nice" plays. The camera pans over to a young woman spinning around, firing dual wield submachine guns at feral ghouls and Protectrons. The next scene takes place at Mount Blair, with two men in power armor fighting off a wave of Liberators. It then cuts to a shot of a frog in the Cranberry Bog looking at a group of four explorers. A C.A.M.P. set up around a Red Rocket station is shown, followed by three people sitting around the campfire, roasting marshmellows with a deathclaw and Mister Handy. Another scene in the Cranberry Bog follows, with a woman holding a laser rifle meeting another unseen person. The final shot brings all of the characters together to watch a nuclear explosion, from which a scorchbeast rises.

Vault-Tec would produce several animated short educational films - similar to the animation style used in the What makes you S.P.E.C.I.A.L. shorts - exclusive for Vault 76, produced by the Vault-Tec American Tricentennial Committee. These films would focus on the unique position and equipment Vault 76 would be in and have when emerging in 2102. Each of the films prominently feature Vault Boy either succeeding or failing as an illustrative lesson on the do's and do not's of Appalachia, often with cartoonish gory results.

Being A Better You (Success Is In The Cards)

Today's episode, Being A Better You.

In life, we must each deal with the hand we are dealt, performing our assigned role to the best of our capacity. But after total atomic annihilation, you may find the hand you were dealt has been reshuffled.

Yes, gone are the simple days of yesteryear. Now the common workman must also be a covert operative, the farmer, a master of the martial arts, the ice-cream man, a nuclear physicist. How will you make sense of it all?

Simple, turn to your official Vault-Tec training materials. With these powerful tools in hand, you'll learn to make the most of your natural abilities, and learn what makes you S.P.E.C.I.A.L..

Use them to be the best "you" you can be, or someone even better. Your survival depends on it. With your future secure, share your newfound knowledge with others for great benefit. But remember, there's power in diversity.

Sometimes who we are isn't a choice at all. In fact, at a particular point in your young life you may notice that your body has begun going through some unfamiliar changes. No, it's not puberty, it's mutation.

Thanks to our old pal radiation, your DNA has become more interesting. See here? You've now gained the unique abilities of a marsupial, in exchange for a mild neurological impairment.

Now you've learned how to be a better you. You are completely prepared to achieve your full potential, in the role of your choosing.

Let's Work With Others (The Art Of Cooperation)

Today's episode, Let's Work With Others, the art of cooperation.

As you venture out into this new American frontier, you may find yourself a little lonely. Chin up there, sport. Your fellow Vault 76 dwellers will have emerged as well. Brave the new world together. But don't become too attached too quickly.

When making new acquaintances, practice the art of non-verbal communication, to gain that personal edge. Remember, cooperation is the key to success. There's no "I" in nuclear wasteland.

Employ these proven techniques, and your camaraderie will blossom. In fact, you might just make some lifelong friends. Of course, not everyone will be quite so neighborly. Beware the clever ploy.

In the event of catastrophe, search for opportunity. Should you find yourself alone once more, don't fret. Replacing those old friends with new, better friends is a snap. See? You're prepared for anything.

Now you know the benefits of working with others. You are completely prepared for the world above, with exciting new social skills.

Atomics For Peace (The Keys To Lasting Success)

When you emerge from the comfort and safety of your Vault, the world you know will have changed. Take your friendly old neighbor Johnny. Rather than coming over to borrow a cup of sugar, he may now be coming over for murder.

Worse still, he may not be alone. In this instance, your current defensive implement will not be enough to do the job. The time has come to seek out greater means of protection. Nuclear armaments.

That's right, courtesy of your Uncle Sam, these wonders of the atomic age can be found right in your own backyard. "But how does a fellow like you acquire nuclear launch codes?" You may ask. Begin by inquiring with the locals. Gently coax them into cooperation. Use a little elbow grease if you have to.

In the event you don't acquire a full code on your own, do not give up. Think back to the old saying: "The enemy of your enemy is your friend." Search for others who might be harboring a grudge. You'll have that nuclear launch code in no time.

With the power of the atom at your fingertip, be responsible, and consider your target carefully. Will your bomb land on a rival camp of degenerates? A random stranger? The local wildlife? The choice is yours.

Whatever your target may be, take advantage of the resulting fallout to gather rare and valuable resources. Yet these rewards don't come without risk. Monitor your environment for anything out of the ordinary.

Now you know the benefits of using atomics for peace. You are completely prepared to responsibly use nuclear weapons.

What separates man from beast? No, it's not his ability to tap dance. It is his desire to build. After thermonuclear war, man's towering industrial marvels may no longer stretch to the heavens. It then falls on you and the ingenuity of you fellows to rebuild the America we hold dear.

Get started with C.A.M.P.. The Construction and Assembly Mobile Platform. It's the workbench of tomorrow. Once established, your C.A.M.P. will not only provide you with much needed shelter, but also the means to satisfy your hunger, quench your thirst, and even treat infection. The essential pillars of survival.

Expand your C.A.M.P. by scavenging resources or mining raw materials the old fashioned way. Then, construct your home of the future. If your first home site is undesirable, use your handy C.A.M.P. to move it to a better location.

With your home secure, you can now craft handmade ordinance at your leisure, to give your altercations that personal touch. Or, better yet, sell these implements to your neighbors, for profit. Remember, capitalism, it's the only thing keeping us from being communists.

The world may have ended, but keeping up with the Jones' has not. Use those hard-earned profits to upgrade your dwelling. When your home looks important, you are important. Now you've learned how to forge the New American Dream. You are completely prepared to rebuild the greatest nation in the world. 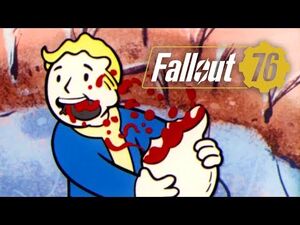 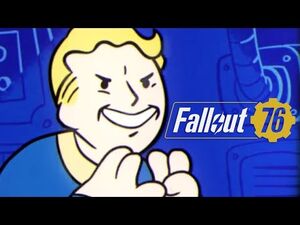 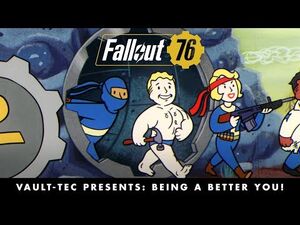 Fallout 76 – Vault-Tec Presents- Being a Better You! Perks Video PEGI 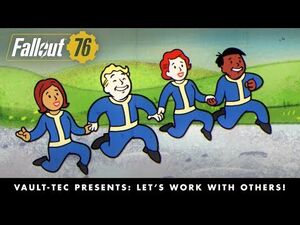