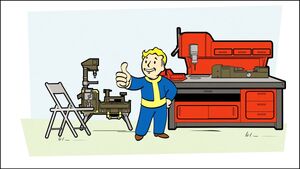 A C.A.M.P. (Construction and Assembly Mobile Platform) is a player's personal home base, which can be relocated to almost any location on the map. Setting up a C.A.M.P. costs a small number of bottle caps and cannot be placed too closely to certain existing structures or other C.A.M.P.s.

Note: Shelters are shared between CAMPS.

Players can also build structures and decorate at any workshop which they have claimed. Claiming a Workshop grants access to a bank of resources to be used in building up the workshop. Workshops also have resources which can be harvested by using a extractor. After claiming a workshop, the character is advised to build defenses before waves of enemies attack during an event.

Players may also need to defend their Workshops against other players who may contest their ownership of a Workshop. According to the Bethesda FAQ, "If a player attempts to contest a Workshop you own, or you attempt to contest another player's Workshop, you will be open to taking full damage from their attacks."

Additional objects may be unlocked for crafting.

Settlement construction
Add a photo to this gallery
Retrieved from "https://fallout.fandom.com/wiki/Fallout_76_settlements?oldid=3477751"
Community content is available under CC-BY-SA unless otherwise noted.