While traveling throughout Appalachia, the player character can experience some random encounters. 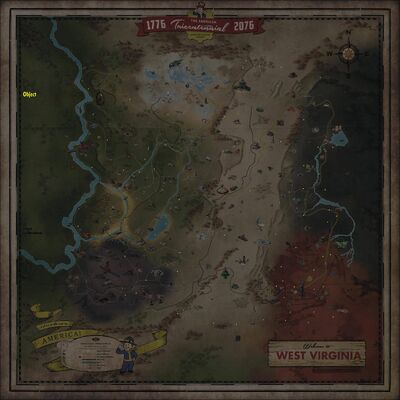 Backwoodsman: Get Off My LawnEdit

A crashed vertibird, with a variety of junk, healables and weapons.

Find Ford, holding a holotape, with a duffel bag nearby.

Find a dead Hornwright miner. He has a safe key on him.

Find a PRC scientist, holding the We have failed holotape.

The player character will come across a fresh grave with a headstone guarded by feral ghouls. The grave will contain random junk or apparel items.

A dead lone traveler with a random rifle and a duffle bag with food/water aid items, in addition to a weapon and binoculars.

Triggers the quest Into the Mystery if not already started from finding one of the preset corpses.

A couple of protectrons patrol the site of a crashed satellite, which contains robotic junk items such as copper tubes and military-grade circuit boards.

One encounters a dead civilian near a tent, surrounded by a couple of super mutants.

The player character may come across an undetonated bomb sitting in a pile of debris. Interacting with the bomb will give them the option of cutting a red wire, blue wire, or green wire to defuse it. Cutting the wrong wire will cause the bomb to subsequently begin beeping and explode, similar to an exploding vehicle in size. Cutting the right wire will defuse the bomb and allow the player character to collect scrap from the device. If the bomb is successfully defused it will beep only once. The bomb can then be looted of crystal shards, fiber optics bundles, nuclear waste, copper, and steel scrap. The appropriate wire to cut changes for each encounter.

Two wendigos patrol the perimeter of dead merchants and pack brahmin, in addition to minor loot.

The abandoned wreck of a tank. There are the skeletons of two soldiers by it and three ammo boxes. It is guarded by two Mister Gutsies and an assaultron. 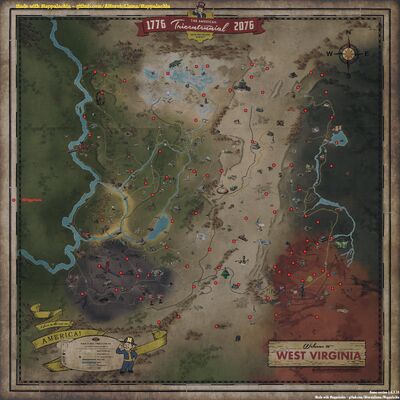 Three auto-miner protectrons dig into the ground with their drill hands, ignoring the player character and focusing on mineral extraction.

Location found by listening to holotape Scope out the crash, held by a Scorched believer.

Associated with the notes Cultist's invitation and Cultist's reply.

Five dead brahmin within proximity, with the associated items on death.

The player character will come across the corpse of a dead Responder, possibly beside a duffle bag containing materials. The Volunteers needed! note will be either on their person or in the duffle bag.

The corpse of a man wearing a straight jacket. His corpse contains crazed ramblings, a radbear, and a table spoon.

The player character will come across four mannequins with flower vases underneath them and a green chest containing various items. The paper note, Not sorry, will be in the chest.

A Recruiter Gutsy offers to join the United States Armed Forces and go to Camp McClintock.

A Responder eyebot is seen hovering along transmitting a message in Morse code. The message reads "Reconnaissance of designated location recommended. Stand by to receive coordinates. Tactical assessment. Possible situation developing." If followed, it will simply repeat the same message as it continues onward, sometimes doubling back on its path and repeat its patrol until the area is left. Sometimes, a non-hostile scorchbeast will be flying overhead, thus reason for the eyebot to maintain its quiet Morse code transmission to avoid alerting the scorchbeast to its presence as the scorchbeast might be reason for the Morse code message.

Paranoid robot about to explodeEdit

A Mister Handy cries piteously for help. If it is interacted with, it will explain that it is on the verge of a malfunction that could cause it to explode. The Mister Handy pleads with the player character to repair it, and collapses into a heap on the ground. Fixing the robot requires two pieces of steel, one piece of copper and one military-grade circuit board; the reward is a weapon mod.

The player character will occasionally be approached by a Mister Handy called Mr Prize-bot, that claims the player character has won a prize from the Great Appalachian Sweeptakes, and will give them random items or the G.A.S. prize certificate.

A random encounter of a supply drop as if requested from a relay tower. Contains random aid items and a weapon.

The player character can find a dead courier for the Responders dressed as a postman. They will be holding random items and the Casualty report: Flatwoods note.

A Mr. Handy called Mr Veterinarian will be leading three stray cats while calling for help because the world has gone mad and their lives are in danger. It requests that whoever is in earshot help it get the cats to the Wixon homestead.

The player character may occasionally find a Miss Nanny in the wilderness of Appalachia that will randomly tell one of 6 children's stories about either: Cinderella, Goldilocks and the Three Bears, Jack and the Beanstalk, Little Red Riding Hood, The Three Little Pigs or Hansel and Gretel. Waiting and listening to her entire story will reward some random aid items.

The player character may occasionally find a single animal wandering the wastes. These base animals can be tamed with Animal Friend or Wasteland Whisperer. Once tamed said animals will head to the camp and act as a guard taking up 10% of the camp budget.

A dead treasure hunter with a random treasure map, two boiled water and a machete.

Find Willie with a box of Blamco Brand Mac and Cheese and The Golden Holotape. Reference towards Willie Wonka's Chocolate Factory.

This is encountered by the wendigo cave.

A non-hostile mothman with purple eyes roams the area and is non-essential.

2 Mr. Handies talking back and forth in endless loopEdit

Ms. Nanny Mia and Mr. Handy Vlad are encountered by the player character, asking each other random questions and answering with random responses. 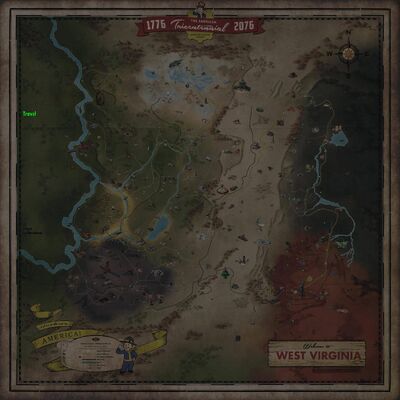 Involves a wandering eyebot, Preacher Levenson, inviting one to go to Haven Church to repent.

A non-hostile eyebot followed by five non-hostile radrats, playing what can be heard as The British Grenadiers on flute.

A Responder eyebot is seen hovering along transmitting a message in Morse code. The message reads "Reconnaissance of designated location recommended. Stand by to receive coordinates. Tactical assessment. Possible situation developing." If followed, it will simply repeat the same message as it continues onward, sometimes doubling back on its path and repeat its patrol until the area is left. Sometimes, a non-hostile scorchbeast will be flying overhead, thus reason for the eyebot to maintain its quiet Morse code transmission to avoid alerting the scorchbeast to its presence as the scorchbeast might be reason for the Morse code message.

The player character can come across a group of Scorched roaming the Forest. One of them will be carrying a Responder's note in their inventory.

One encounters a sentry bot patrol.

The player character may occasionally find a wandering Vendor bot Responder traveling through a region of the Forest, partied up alongside a pair of eyebots and a pack brahmin. They can potentially sell a variety of outfits and plans that cannot be found anywhere else.

As dusk approaches in-game, the player character may suddenly be attacked by a wendigo.

A dead brahmin with spoiled meat, three mysterious quills, and brahmin hide that can be looted.

Involves an encounter with Mr. Squeeze, a mister handy robot with yellow coloration. Can appear with or without a lemonade stand.

Randomly found on a raider corpse, has the Dead raider's note on him.

A sheepsquatch sleeping in its nest. When approached, it will leap up and attack the player.

Five dead super mutants carrying mysterious quills are accompanied by one alive, and injured, super mutant who is non-hostile, mourning his dead comrades from a sheepsquatch attack. 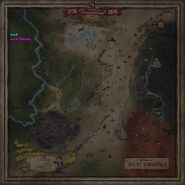 Assault encounters
Add an image to this gallery
Retrieved from "https://fallout.fandom.com/wiki/Fallout_76_random_encounters?oldid=3178408"
Community content is available under CC-BY-SA unless otherwise noted.