The Fallout 76 railways are a series of rail lines comprised of several locations in the former state of West Virginia.

The rail lines and stations are not operable in the same fashion as they were before the Great War. Although the tracks are either destroyed or flooded, with trains and boxcars sitting idly along the tracks or in derelict piles on either side.[1]

Following the war, factions have reopened the stations to trade and each location has several amenities for Vault Dwellers to utilize on their travels through the region. The stations themselves have been given a new purpose by way of vendor bots, vending machines, and workstations.[2] 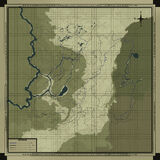 Some amenities vary by station, including availability of tinker's workbenches, cooking stations, weapons workbenches, armor workbenches, and chemistry stations. Miscellaneous loot, notes, and consumables are commonly found in and around the train stations and can be collected or used freely. Wayfinding world maps are posted at all stations, with push pins indicating other locations. Observing this map will add any locations currently unknown to one's map. Some of these maps have been marked up with chalk.

In addition, several posters can be found on bulletin boards within the stations which begin questlines.[3] Viewing four of these posters will begin an associated quest. By viewing the Pi Kappa Mu party poster, the Wasted on Nukashine quest will start. After seeing the Pioneer Scouts recruiting poster, the Order of the Tadpole quest begins. If one views the Sheepsquatch ate my brother variant, Lying Lowe initiates, and if the Shelters poster is observed, the Home Expansion quest is added.

The railway system progresses through several trainyards owned by New Appalachian Railroad as well as the Big Bend Tunnel. The rail system complements other public transportation constructs, including monorail lines in Morgantown and an additional monorail stretching across the entirely of the southern Appalachian region. The railroad crosses and runs parallel with several roadways, including several state highways, routes, and interstate.

The Red Line stretches both north to south and east to west across the Appalachian area, passing through all but one of the six regions. The line begins (or ends) at Grafton Station in Toxic Valley, continuing southbound to Morgantown Station. After running alongside the Morgantown monorail for a short distance, the tracks continue south to Sutton and its train station into the heart of the Forest region.

The rail line progresses southwest toward the state capital, where Charleston Station is situated on the western fringes of town, overlooking the Poseidon Energy Plant. Traversing southwest once more, the rail line enters the Ash Heap, progressing through Mount Blair Trainyard, curving through the Rockhound and abandoned mine shafts until arriving at the Welch Station.

From Welch, the railroad progresses eastbound through the Ash Heap, reaching the Lewisburg Station a short distance later. Due to the mountainous region of the Savage Divide, the railway progresses underground into the Big Bend Tunnel, opposite the Appalachian monorail system that climbs the peaks overhead. At the end of the tunnel, the railway enters into the Cranberry Bog region, passing through a Brotherhood of Steel checkpoint. The line continues east, entering Watoga and reaching its terminus at the Watoga Station, running parallel with the monorail once more.

The Blue Line stretches both north to south down the middle of the Savage Divide. The line begins (or ends) at Sunnytop Station, continuing southbound to Pleasant Valley Station. Nearly the entirety of the line runs alongside Highway 63, beginning at Fort Atlas. The tracks continue south through 98 NAR Regional and the New Appalachian Central Trainyard before reaching the Whitespring Station. The rail line continues to progress alongside Highway 63 until reaching Mountainside Bed & Breakfast, where it turns slightly southeast, passing Site Charlie and passing underneath the monorail. The line shifts sharply to the east, passing R&G Processing Services before crossing State Route 101, looping back westward before ending at R&G Station.

The small stretch in the Mire lacks a name, listed only in a terminal as "null" as opposed to the named Red and Blue lines. The short fragment is situated in a V-shape, one end beginning near Berkeley Springs Station, surrounding Harpers Ferry. The Berkeley Springs location is the only train station on the route, the terminal reads that it was decommissioned and that the line was no longer in service.[6]

The line runs parallel with State Route 107 until intersecting Highway 65, afterward crossing a bridge to a tunnel leaving the region to the east. The railway emerges from the same tunnel incoming from beyond the eastern boundary, progressing southwest towards Big B's Rest Stop. A collapsed tunnel that leads into the mountains ends the line shortly thereafter, south of State Route 108 near Moth-Home.

There is a small stretch of railroad in the northwest of Appalachia. Coming west from across a broken bridge from Ohio, the railway goes through the West Virginia Lumber Company and continues to the north, disappearing into a collapsed tunnel.

The train stations and railways appear in Fallout 76.

Several signs are based on real-world signs that are found along the tracks and stations of the Reading and Northern Railroad, among other railroad companies in the US.[7][8][9][10] 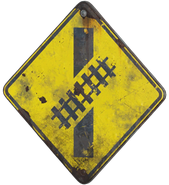 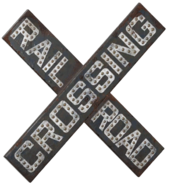 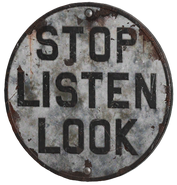