View source
“Radiation has given you a Mutation! You gain positive and negative effects. Using RadAway has a chance to cure any Mutations.”— In-game notification

Mutations are a type of effect in Fallout 76.

Mutations are acquired by the player when exposed to radiation. They provide both positive and negative effects. Mutations are semi-permanent effects that provide both positive and negative effects. Whenever a player takes radiation damage, they have a chance to gain a mutation, equivalent to 5% per 5 points of radiation damage. This can occur from being struck by excessive background radiation from a source such as zones devastated by nukes, irradiated creatures, radioactive waste, etc. Players cannot acquire a mutation from radiation until level 5. If a mutation is acquired from radiation damage, another mutation cannot be acquired until the player leaves that server.

It is possible to acquire up to 18 of the 19 available mutations at the same time. The exceptions are Carnivore and Herbivore, which prevent one another from being acquired.

The Class Freak perk will reduce the negative effects of a mutation by 25/50/75%, while Strange in Numbers will grant a 25% increase to the positive effect if teammates are also mutated. Mutant's legendary items will only activate if the player is mutated.

Every time the player uses RadAway, RadAway: diluted or a decontamination shower, there is a chance that a randomly selected mutation will be removed. They can keep using RadAway for more attempts to remove a mutation. Mutations cannot be removed through death. However, a percentage of rads is removed upon death. Nuka-Grape, brahmin milk, or the perk cards Healing Hands, Rad Sponge and What Rads? can also be used to remove rads without risk of curing mutations.

The Starched Genes perk allows for locking mutations, as it reduces/eliminates both the chance of becoming mutated and their removal chance. Radiation protection gear (e.g. hazmat suit) reduces the chance of mutation.[verification needed]

Players may be affected by the following mutations:

Serums and their recipes are sold by the MODUS science terminal in the Science Wing of the Whitespring bunker. Other players may also sell serums via a C.A.M.P. vending machine.

Even with the Starched Genes perk, the positive effects of current mutations can be suppressed by Rad-X for 10 minutes. To avoid the suppression effects of Rad-X, the diluted version or RadShield can be used to gain Radiation Resistance. If the player already has a mutation, the respective serum will suppress the negative effects of the mutation for 60 minutes. For example, consuming a marsupial serum while already having the Marsupial mutation will temporarily remove the Intelligence debuff.

Mutations were originally planned to have a cosmetic impact on the player, changing their appearance temporarily or permanently.[citation needed] 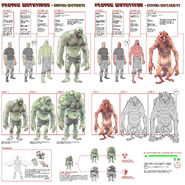 Concept art of an earlier version of the mutations mechanic