View source
watch 24:51
Fallout Interactive Experience
Do you like this video?
Play Sound
“Multiplayer finally comes to the epic open world RPGs of Bethesda Game Studios. Create your character with the S.P.E.C.I.A.L system and forge your own path in a new and untamed wasteland with hundreds of locations. Whether you journey alone or with friends, a new and unique Fallout adventure awaits.”

The achievement Good Grief! is unlocked after killing 20 players in PvP combat.

A wanted player will not see the locations of any players or C.A.M.P.s on the map, except for teammates. Wanted players are considered flagging for PvP with any player, even teammates or temporary event teammates. Another player may automatically begin PvP by attacking the wanted player. Killing the marked player subtracts the sum of the bounty from their caps and transfers it to their killer. Once the wanted player is killed, their bounty is removed and they are allowed to see other players and C.A.M.P.s on the map again until they commit their next infraction to earn a wanted status again. 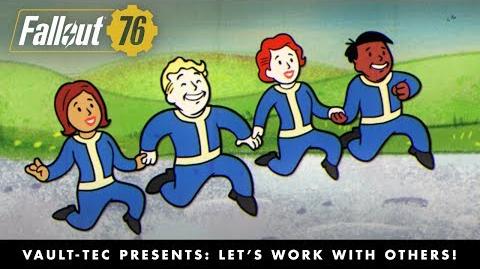