The Fallout 76 Vault Dweller's Survival Guide is a publication by Prima Games. The guide contains strategies, maps, walkthroughs, and reference data that a player may find useful while playing Fallout 76, as well as some additional background information not found within the game itself about its setting and locations. The edition contains a bonus of a free code to access an eGuide on any web device.

With Fallout 76's many updates, the guide is now outdated, as it only reflects the game as it was presented prior to release. Official Prima guides for updates such as Wastelanders or Steel Dawn have not been issued and the company's print operations closed in 2019.

Possible discrepancies between the guide and gameplay information are as followed: 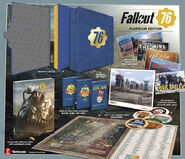 Glass coasters in the Platinum Edition