In Fallout 76, all players begin with 1 point in each SPECIAL attribute. Each time a player levels up, they can, at their leisure via the Pip-Boy, choose 1 SPECIAL attribute to increase, up to a maximum of 15. After making their selection, they may choose from a selection of perk cards, which defaults to the SPECIAL that was increased. For each point in a SPECIAL, players may equip an equal value of ranked perk cards.

Upon reaching level 50, players will reach their maximum allotted 56 SPECIAL attributes, and cannot gain any additional points via level up.[1] However, perk cards may still be selected once per level indefinitely. SPECIAL may still be increased further by equipping legendary perks, which may increase the maximum by +30 points if fully upgraded in all six slots.

In Fallout 76, SPECIAL serve as primary statistics which modify various derived statistics, such as Hit Points or Carry Weight. As SPECIAL goes up, so do these stats. As SPECIAL goes down, they will as well. In addition to passively increasing derived statistics, SPECIAL is used to measure skill checks. Skill checks may present themselves as dialogue choices when talking with NPCs, or additional options when confronted by various obstacles, such as repairing a broken toaster.

Through the use of temporary boosts from food, drink or aid, SPECIAL may be increased or decreased beyond the selected base values. Even if they are affected by sufficient buffs or debuffs to mathematically push them past the threshold, SPECIAL attributes cannot be increased past 100 or reduced below 1.[2]

Derived statistics are calculated based on the current SPECIAL values. For example, Carry Weight is determined by the player's Strength. Although some statistic values are shown, not all are explicitly expressed by in-game interfaces.

Miscellaneous statistics are calculated based on equipment, perks or buffs. Although some statistic values are shown, not all are explicitly expressed by in-game interfaces.

Perks in Fallout 76 are characterized as playing cards that the player collects as they level up. Each perk card costs at least 1 point in its designated SPECIAL attribute to equip. Players can equip multiple cards per attribute when the total perk point cost is equal to or less than the points of the attribute. The number of perk points is capped to a maximum of 56, however this limit may be pushed to 86 when using Legendary SPECIAL perks.

Certain perk cards can be upgraded to further improve their benefits. One can upgrade, or rank up a perk card by while in possession of a duplicate.[3] Ranking up a Perk card also increases the amount of SPECIAL points required to equip that Perk card. For example, ranking up the Gladiator 1 perk card to Gladiator 2 would increase the Strength requirement from 1 to 2 Perk cards do not need to be the same rank in order to rank them up; the combined cards are simply added together.

Starting at level 50, perk cards may be scrapped into perk coins (

), which are used to upgrade legendary perks. The perk cards are worth 2 coins for each star, or rank up. For example, Gunsmith 5 is worth 10 coins, while Party Girl/Party Boy 1 is worth 2. Each legendary perk slot is unlocked account-wide every 50 levels. In order to unlock all 6, a single character on the account must reach level 300. If that character is deleted, the slots remain unlocked.

As of the Locked & Loaded update, a new feature was added where players can customize multiple SPECIAL loadouts to use at separate times with their Vault Dweller during gameplay, allowing a larger variety of various perks and SPECIAL points to use in conversation with NPCs, combat, and more. For now, only two SPECIAL loadouts can be customized. More loadout slots are available through the Atomic Shop following the Steel Reign update for 500 Atoms per slot. 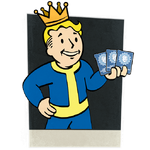 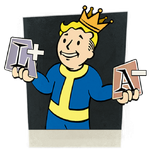 "Pick a Job That's SPECIAL to You!" 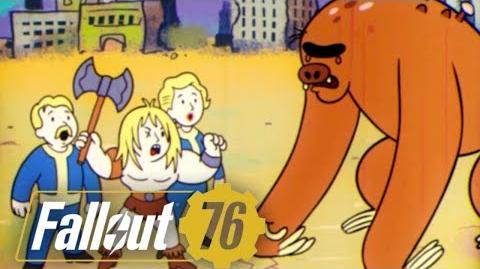