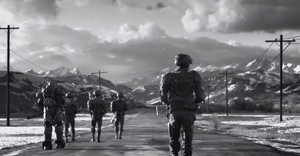 “Because if my time in the army taught me one thing: it's that war, war never changes.”— Sole Survivor/Nate

When the Fallout 4 logo disappears from the screen, the Sole Survivor's narration begins and states:

In the year 1945, my great-great grandfather, serving in the army, wondered when he'd get to go home to his wife and the son he'd never seen. He got his wish when the US ended World War II by dropping atomic bombs on Hiroshima and Nagasaki.

The World awaited Armageddon; instead, something miraculous happened. We began to use atomic energy not as a weapon, but as a nearly limitless source of power.

People enjoyed luxuries once thought the realm of science fiction. Domestic robots, fusion-powered cars, portable computers. But then, in the 21st century, people awoke from the American dream.

Years of consumption lead to shortages of every major resource. The entire world unraveled. Peace became a distant memory. It is now the year 2077. We stand on the brink of total war, and I am afraid. For myself, for my wife, for my infant son - because if my time in the army taught me one thing: it's that war, war never changes.”— Nate, Fallout 4

The Sole Survivor's great-grandfather with his mother.

The detonation of either Fat Man or Little Boy, the first nuclear weapons ever deployed in war

A pre-war industrial center and monorail

A nuclear-powered car cruising down a suburban street

An engineer testing the Pip-Boy 1.0

Children fighting in a pre-war ghetto

Rioters charge towards an industrial center

A Chinese soldier during the Battle of Anchorage

Missile carriers on a small-town street

A photograph of Nora

Retrieved from "https://fallout.fandom.com/wiki/Fallout_4_intro?oldid=3284876"
Community content is available under CC-BY-SA unless otherwise noted.