Creatures are animals, humans, and their mutated counterparts encountered in the Commonwealth and surrounding areas. 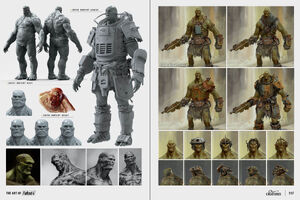 Most creature types have a chance to spawn as a legendary variant, as well as tiered named variants leading up to the legendary creature. A legendary creature will almost always drop a weapon or a piece of armor with unique modifiers (displayed on the Pip Boy with a star). For more information on these modifications, see Legendary effects.

In combat, legendary creatures are very powerful as they are stronger than non-legendary creatures of the same type (see below for specific differences), and they are often among the highest-leveled variants a player is capable of running into at their particular level. For example, a level 30 player seems more likely to encounter a legendary super mutant brute (approx. level 22) than a legendary super mutant (approx. level 10), but the lower-level encounter is still possible.

If a legendary enemy is not killed within a single shot, volley, or VATS session (depending on the weapon in use), once they lose half their health they will "mutate," regaining all health and possibly growing stronger.

Retrieved from "https://fallout.fandom.com/wiki/Fallout_4_creatures?oldid=3102481"
Community content is available under CC-BY-SA unless otherwise noted.