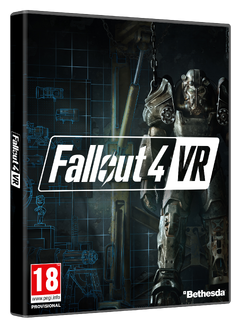 “As the sole survivor of Vault 111, you enter a world destroyed by nuclear war. Every second is a fight for survival, and every choice is yours. Only you can rebuild and determine the fate of the Wasteland. Welcome home.”

Fallout 4 VR is a post-apocalyptic role-playing game developed by Bethesda Game Studios and published by Bethesda Softworks.[1] It is a remake in virtual reality of the fifth major installment in the Fallout series, and was released on Microsoft Windows with HTC Vive on December 12, 2017.

Bethesda announced on October 17, 2017, that purchasers of a VR headset will receive a redeem code to receive Fallout 4 VR for free,[2] proceeding an announcement by Valve on October 2.[3]

The player is the Sole Survivor of Vault 111, who emerges 210 years to the day and time after the Great War. Prior to this, there is a brief period of gameplay during the pre-War era showing the player living with their spouse and child.

As revealed in the trailer on June 3, 2015, the setting takes place in Boston, Massachusetts. Famous local landmarks like the Paul Revere Monument, the USS Constitution, as well as the Massachusetts State House with its unique Golden Dome are included in the game world. Other notable present-day locations that make an appearance in the game are Scollay Square, Bunker Hill memorial, and Fenway Park, which is renamed Diamond City. The events of Fallout 4 occur in 2287; a decade after Fallout 3 and six years after Fallout: New Vegas.

Vault 111 is in the northwest corner of the game map. The Sole Survivor starts the post-war adventure wearing the Vault 111 jumpsuit. The trailer featured a player character carrying a laser musket, meeting the dog companion Dogmeat and starting on a road leading away from the camera, a motif seen in various previous Fallout installments.

Vault 111 is also near Sanctuary Hills, the residential area where the Sole Survivor lived before the war. This is most likely the first location that the player comes across after emerging from the Vault. The protagonist's household robot, Codsworth, still resides there. Sanctuary Hills is also one of the player-built settlement sites.

The setting also includes mountains, coastal regions, the outskirts of the city and the downtown Boston area. A large and still inhospitable nuclear blast site is to the southwest. The starting area in the northwest contains low level enemies and is relatively safe, but the enemies get progressively tougher towards the southeast area of the map.

The game features just over 111,000 lines of dialogue, more than all of the dialogue in Fallout 3 and The Elder Scrolls V: Skyrim combined.[4]

“Experience Fallout like never before, with Fallout 4 VR, coming this October. Revealed during the Bethesda E3 2017 Showcase, Fallout 4 VR will be available on PC for the HTC Vive. With the power of VR, you’ll be able to get up-close-and-personal with the dangers of a post-apocalyptic world as you fight for survival. Featuring new combat, crafting and building systems fully reimagined for VR – including VR-enhanced V.A.T.S. – Fallout 4 VR isn’t just a jaunt through the Wasteland, it’s the entire game. The whole world is fully explorable. That includes hundreds of locations, characters and quests. This is your opportunity to step into the Wasteland and experience Fallout 4 in a whole new way.”— Bethesda.net news, June 11, 2017

HTC Vive controls
Add a photo to this gallery 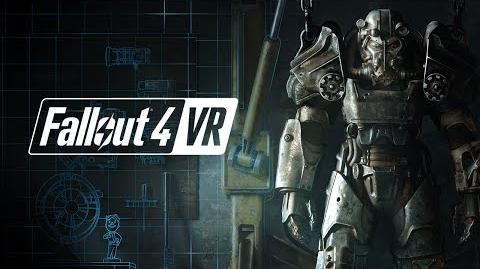 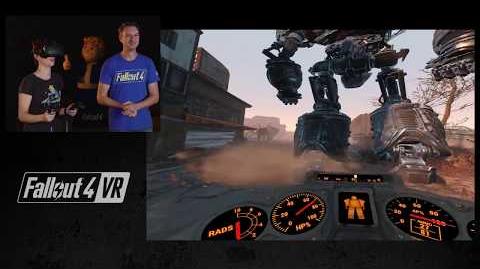 An Intro to Fallout 4 VR on HTC Vive

Retrieved from "https://fallout.fandom.com/wiki/Fallout_4_VR?oldid=3476528"
Community content is available under CC-BY-SA unless otherwise noted.