A large number of vehicles are found scattered around the wastelands. If struck, vehicles may catch fire, starting a process by which they will then detonate shortly thereafter. Vehicles that explode leave an irradiated area for a brief period of time. There are no drivable vehicles but there are some instances where vehicles are used as a means to transport the Lone Wanderer to a new location.

In the Broken Steel add-on, the player character can visit the interior of the Brotherhood of Steel's unique vertibird. It is also possible to ride an underground subway train in the presidential metro during the main questline. Traveling to Point Lookout is done on a pre-War ferry, the "Duchess Gambit." The player character is also required to use a railroad hand cart to enter and exit The Pitt. 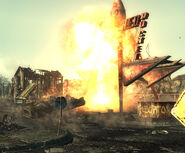