A poster is a piece of printed media used for broadcasting a visual message. It is designed to adhere to a wall, a billboard, or other vertical surfaces.

Posters are intended to be eyecatching, but also to convey information. They are often used to advertise a product or service, or by political parties and protestors as a form of propaganda. They are usually pasted on walls, above or near roadways, or in designated frames in locations such as metro stations.

Several varieties of posters can be found throughout the Capital Wasteland. Most of the examples are advertisements, pasted onto walls in the game world as decal textures. They are also seen in the projector slideshow menus and loading screens. Most were put up before the Great War and are still legible, albeit torn and weathered.

Propaganda issued by the United States meant for recruitment, buying war bonds, and warning about a nuclear attack. 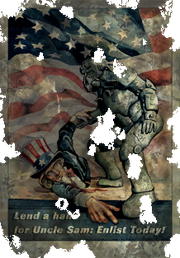 This poster shows a soldier in T-45d power armor helping up Uncle Sam in front of a billowing U.S. flag, with the caption "Lend a hand, for Uncle Sam: Enlist Today!" These posters do not depict the flag's stars in a circle. 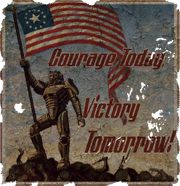 This poster shows a US soldier clad in power armor standing triumphantly atop a pile of dead red Chinese soldiers, and planting the US flag. It is accompanied by the caption; "Courage Today, Victory Tomorrow." 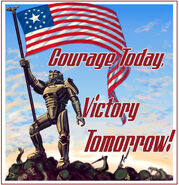 Concept art by Adam Adamowicz
Add a photo to this gallery 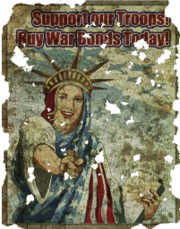 "Support our troops! Buy war bonds today!" this poster reads. It shows Lady Liberty pointing at the reader. War bonds were presumably a method the US armed forces used to acquire additional revenue from civilians. 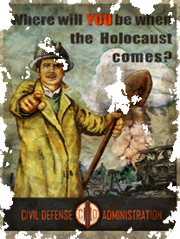 "Where will YOU be when the holocaust comes?" asks a fireman, pointing at the viewer in an Uncle Sam fashion with one hand, holding a shovel in the other. In the background, there is a post-apocalyptic urban wasteland and a mushroom cloud. This poster was designed and published by the Civil Defense Administration.

A less frequently encountered poster, this one was created by the Civil Defense Administration to educate pre-War children about what to do when the nuclear apocalypse came, in a lighter fashion. It shows Bert the Turtle looking surprised by a stereotypical round, black bomb with a lit fuse in the top, exclaiming; "Oh my! DANGER!" He then hides inside his shell as the bomb detonates in a comic book style explosion, therefore protecting him from the blast. It has the caption; "Kids, learn to find shelter."

A pre-War propaganda poster depicting the "Red Menace," a devilish looking communist, antagonizing Americans. The poster is intended to enlist recruits for stopping the Red Menace.

Propaganda from the Enclave.

Propaganda from the People's Republic of China. 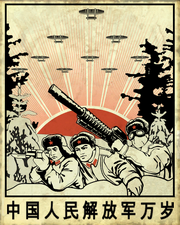 As seen in-game
Add a photo to this gallery 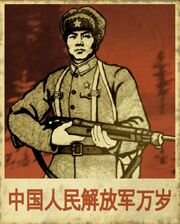 As seen in-game
Add a photo to this gallery

Posters created by the Vault-Tec company to promote the sale of vaults. Also, posters for Vault-Tec employees and services were made and established in-game throughout various Vault-Tec owned buildings.

This pre-War poster depicts a cut-away of the Earth with part of a vault shown underground and a family with a picnic above. Vault Boy is looking down on the scene triumphantly, with the words; 'We'll Be There!' at the top. Three copies of this poster can often be found hastily plastered over the top of each other.

In the game
Add a photo to this gallery 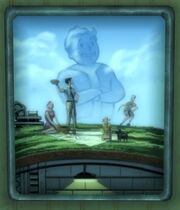 This pristine, framed poster appears in the Lone Wanderer's room in Vault 101.

Another piece from Vault-Tec's marketing division, It is titled; "Sign up at your local Vault shelter today!" and "It's never too late!". It shows Vault Boy holding up a form with 'Vault Shelter' written on it. A landscape orientation version of this poster exists as a billboard.

There won't really be a nuclear war - right? 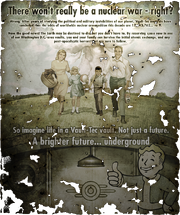 This poster from Vault-Tec gives a morbid statement about the chances of a worldwide nuclear war, and that "the Earth may be destined to die, but you don't have to!" by purchasing a place in a vault. Similar to the other Vault-Tec poster, this poster shows a happy family walking over a cutaway drawing of the earth, with a vault below, and Vault Boy giving his famous wink and thumbs up, next to the slogan; "So imagine life in a Vault-Tec vault. Not just a future. A brighter future... underground."

This poster shows a cutaway view of a vault within a mountain. In addition to its in-game appearances, the poster appears as part of the box art from the Fallout 3 GOTY Edition.

Children are the Future 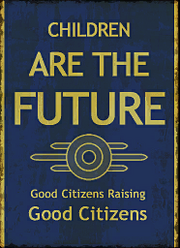 In a yellow text on a blue background, the poster reads, "Children Are The Future - Good Citizens Raising Good Citizens." This poster is found in various vault locations, including in the Lone Wanderer's room in Vault 101.

This poster stating that "Hard Work is Happy Work" is found in many vaults to encourage residents to be more productive when working by being happy. However, during Trouble on the Homefront, the words Hard and Happy are crossed out and instead reads Work is Work.

This poster is also seen in vaults, to show the vault residents' appreciation for all the overseer has done for them. However, this is not the case when the Lone Wanderer returns to Vault 101 during Trouble on the Homefront. Rather than "Thank You, Overseer!", "Thank" has been crossed out and replaced with "Fuck" instead. 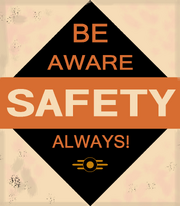 The Vault-Tec Safety Sign is a sign that advocates for safety in Vault-Tec facilities. On a white background, the red lettering on a black diamond reads: Be Aware Always. A yellow Vault-Tec Symbol is below the word Always. Vault-Tec supplied these signs to the vaults prior to the Great War of 2077.

The Adventures of Captain Cosmos 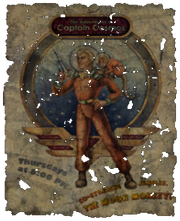 This poster advertises the pre-War science fiction TV show, The Adventures of Captain Cosmos, and displays the show's protagonist, Captain Cosmos posing with a blaster pistol wearing a skin-tight spacesuit and a classic goldfish bowl helmet. Co-star Jangles the Moon Monkey sits on his shoulder, clad in similar attire. The show was aired every Thursday at 8 PM. 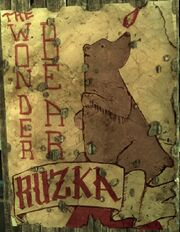 This poster of Ruzka the Wonder Bear advertises the circus attraction throughout Point Lookout.

A GNR ad telling readers of the D.C. area that Galaxy News Radio broadcasts weather, sports, news, and traffic. It also reminds readers that Mornings with Marie airs on the station every day from 6:00 AM to 10:00 AM. 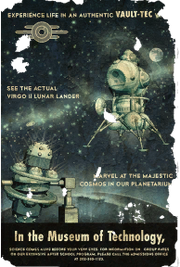 This poster advertises main attractions at the Museum of Technology, the vault demonstration, the Virgo II Lunar Lander, and the planetarium, but not the Gigantomax theatre. In Fallout: New Vegas, they are found in the weather monitoring station, Mobius' house in Higgs Village, Bruce Isaac's room in Novac's Dino Dee-lite Motel, and on the stairwells on the way to the Sunstone Tower roof. A large number can also be found inside of the Hoover Dam power plants.

The Art of Fallout 3
Add a photo to this gallery

An advert for a bowling alley, depicting a family out for a night there. 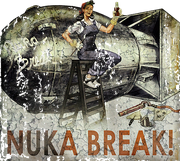 A Nuka-Cola ad depicting a woman drinking some Nuka-Cola while on a break from working on an atomic bomb. Poster created by Adam Adamowicz 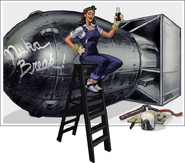 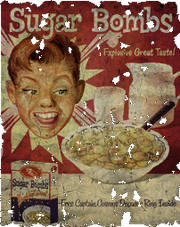 This poster advertises the pre-War breakfast cereal, Sugar Bombs, and the fact that a free Captain Cosmos decoder ring came with every box. 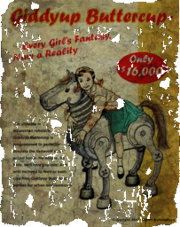 Giddyup Buttercup was a pre-War robot toy marketed towards girls. It emulated, with questionable proficiency, the behavior of a real horse. The ad declares the toy to be "Every girl's fantasy, Now a reality" for "Only $16,000."

Super-Duper Mart: From Groceries to Electronics... 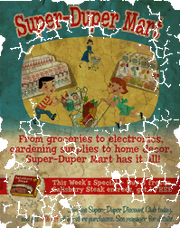 This poster shows one male and two female customers pushing shopping carts in the Super-Duper Mart, some in-game brands are shown in the carts including Salisbury Steak and Abraxo cleaner. It reads; "From groceries to electronics, gardening supplies to home decor, Super-Duper Mart has it all!" followed by details of a weekly offer - in this case Salisbury Steak. 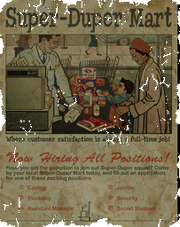 This poster details the positions available at the Super-Duper Mart.

Ad for the 2 Door Bubble Top Corvega. Poster created by Adam Adamowicz. In-game implementation of the art shows the engine designation of the car type and the slogan removed. 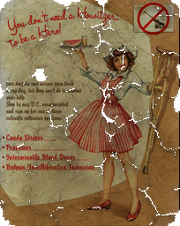 Usually found in hospitals, it depicts a nurse holding up a crutch and a plate with a slice of watermelon and a bottle of pills on it. The caption reads: "You don't need a Howitzer to be a Hero!" followed by a paragraph stressing the importance of obscure hospital jobs in saving lives. It lists example positions such as:

This poster captioned "DC's fastest highway...is underground," advertises the District of Columbia Transit Authority Metro system and its special monthly ticket price. It shows a metro train traveling below ground, with cars above.

The middle text reads "See a ticket agent today for our special monthly ticket, and save!" and the bottom line reads "Ride the metro today, and avoid the city's growing pollution and congestion. Our extensive lines will get you anywhere you want to go, with half the holdups."

This poster advertises the pre-War emporium by the name of Freddy Fear's House of Scares, "for all your Halloween needs!" It shows illustrations of five children wearing Halloween costumes, a boy wearing pretend US power armor, a girl wearing a stripey top and an orange skirt with a black poodle on it, a girl dressed as Lady Liberty, a boy wearing a vampire costume and a boy dressed as a red Chinese soldier. The date designated for the costume contest is the same day as the Great War. 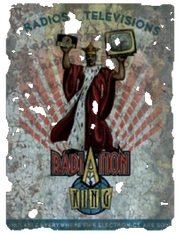 This poster is larger than all the other posters and is usually mounted high on the wall. It advertises the audio-visual equipment company Radiation King and shows the company's mascot - who else - the Radiation King holding up a radio and a television set with rays of radiation behind him. He is standing atop the Radiation King logo. In Fallout: New Vegas, one can be found in Bruce Isaac's room in Novac's Dino Dee-lite Motel.

Abraxo Cleaner For All Your Cleaning Needs 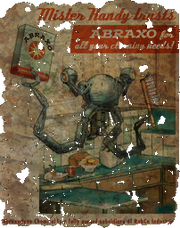 "Abraxo cleaner for all your cleaning needs" the poster reads. It depicts a Mister Handy robot (unusually outfitted with two pincer hands) in a kitchen, holding up a box of Abraxo cleaner and a scrubbing brush.

The Eye Test, or eye chart, is a type of medical equipment used for testing visual acuity. Identified as a Snellen chart, the chart is printed onto a sheet of paper. This chart has nine lines of block letters, with each line, the number of letters increases, and the height of the letters decreases. This poster is found mainly in hospitals, clinics, and other medical facilities. 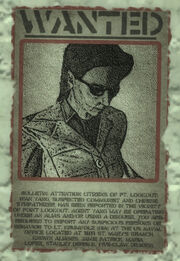 This wanted poster for the Spy Wan Yang can be found posted throughout Point Lookout. Activating it will start the quest The Velvet Curtain.

The Art of Fallout 3
Add a photo to this gallery
Retrieved from "https://fallout.fandom.com/wiki/Fallout_3_posters?oldid=3499106"
Community content is available under CC-BY-SA unless otherwise noted.