In the Fallout 3 intro, some 1950s style vacuum tube components flicker as the camera pans back from the pre-war radio. This reveals a derelict bus and a ruined city as the radio plays "I Don't Want to Set the World on Fire" sung by The Ink Spots. Above the bus windows, there are posters encouraging people to enlist with the US Army and to buy a place in a Vault (featuring the Vault Boy). The camera then moves outside the bus, showing a ruined city, some art deco architecture and a Corvega ad, and finally, a Brotherhood of Steel paladin in T-45d power armor with a newer model of the laser rifle, and a Brotherhood of Steel symbol on his breastplate.

When the city intro fades to black, Ron Perlman's narration begins and states:

Since the dawn of humankind, when our ancestors first discovered the killing power of rock and bone, blood has been spilled in the name of everything: from God to justice to simple, psychotic rage.

In the year 2077, after millennia of armed conflict, the destructive nature of man could sustain itself no longer. The world was plunged into an abyss of nuclear fire and radiation.

But it was not, as some had predicted, the end of the world. Instead, the apocalypse was simply the prologue to another bloody chapter of human history. For man had succeeded in destroying the world - but war, war never changes.

In the early days, thousands were spared the horrors of the holocaust by taking refuge in enormous underground shelters, known as vaults. But when they emerged, they had only the hell of the wastes to greet them - all except those in Vault 101. For on that fateful day, when fire rained from the sky, the giant steel door of Vault 101 slid closed... and never reopened. It was here you were born. It is here you will die.

The cinematic teaser trailer for Fallout 3, consisting of the first part of the intro, was released by Bethesda Softworks on June 5, 2007, after a 30 day countdown on the Fallout 3 website. During the countdown, a new piece of concept art by Craig Mullins was revealed on every Tuesday. The teaser fades to black after the end of the cinematic part, and we hear only the first four words of the narration: "War. War never changes". Then the text "Fallout 3" appears and changes into "Fall 2008". The text of the narration was revealed in July 2007 in Australia's Atomic Magazine. 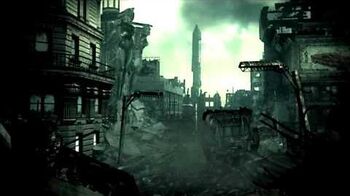 Hundreds of identical graves in Arlington

The ruins of Washington

The ruins of Washington

Storyboard for the intro, concept art by Adam Adamowicz

Initial concept art for the intro to FO3, by Adam Adamowicz 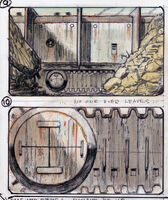 Camera movement
Add a photo to this gallery

Retrieved from "https://fallout.fandom.com/wiki/Fallout_3_intro?oldid=3423407"
Community content is available under CC-BY-SA unless otherwise noted.