Xbox Live
“Prepare for the Future...”

Fallout 3 is a post-apocalyptic computer and console open-ended, action role-playing game developed by Bethesda Game Studios and published by Bethesda Softworks. It is the third major installment in the Fallout series (fifth overall) and a sequel to Interplay Entertainment's Fallout and Fallout 2. It was released on October 28, 2008 in North America, on October 31, 2008 in Europe and Australia and on December 4, 2008 in Japan. It is available on the PC, Xbox 360 and PlayStation 3. On November 11, 2015, Fallout 3 became backward compatible exclusively for Xbox One and later Xbox Series X/S.

The game takes place in the year 2277, 200 years after the Great War, on the East Coast of the former United States in an area now known as the Capital Wasteland. The region explored consists mainly of Washington, D.C., although it also includes parts of the former states of Virginia, Maryland and Pennsylvania. The player character is a teenager known as the Lone Wanderer who has grown up in Vault 101. The Lone Wanderer searches for their missing father, James. Along the way, the Lone Wanderer becomes entangled in both a clash for survival and a battle among factions to reclaim the wasteland. Fallout 3 has a unique storyline from its predecessor but shares common elements.

While Fallout and Fallout 2 feature turn-based combat and top-down isometric view in a 2D engine, Fallout 3 features real-time combat and first- or third-person view in a 3D engine.

Perks and traits have been merged. In Fallout and Fallout 2, traits were chosen at character creation, and were commonly a combination of a powerful advantage and a potent disadvantage, where perks were purely advantageous.

In the SPECIAL character system, the number of skills have been reduced from 18 to 13, traits have been removed and perks are selected every level instead of every 3 to 4 levels.

SPECIAL stands for Strength, Perception, Endurance, Charisma, Intelligence, Agility and Luck. These stats determine the effectiveness of attributes the player character has. As a child in the Vault, the character receives a book titled You're SPECIAL!, in which the player can set the character's seven primary aptitudes.

The character receives training weapons (a BB gun) and a Pip-Boy 3000 later on during childhood, and the player's performance in various tests determines the rest of the attributes.

Skills and perks are similar to those in previous games: the player chooses three tag skills out of 13 to be the character's specialties. Five skills have been cut out from the game (Fallout and Fallout 2 had 18 skills). First Aid and Doctor have been integrated into Medicine, Throwing and Traps have been merged into Explosives, Steal integrated into Sneak, and both Outdoorsman and Gamble have been removed completely. The maximum level the player can achieve is level 20 (which is to be raised to 30 after purchase of the third add-on installment, along with the ability to continue their game after the main story missions are complete). The traits from the previous Fallout installments were combined with perks in Fallout 3, and the player can choose a new Perk each time after gaining a level.

The Vault-Tec Assisted Targeting System, or V.A.T.S., is an active pause combat system implemented in the game. While using V.A.T.S., the otherwise real-time combat is paused. Attacks in V.A.T.S. cost Action Points, and the player can target specific body areas for attacks to inflict specific injuries. When attacks are selected, V.A.T.S. will then execute the attack in real-time slow motion, allowing the gory deaths in the game to be shown in great detail. The player will take 90% reduced damage from enemies during this sequence. It should be noted that while the player has a 15% increased critical hit chance while using V.A.T.S., weapon degradation per shot is greatly increased, forcing the player to strike a balance between using more ammunition or losing guns more quickly. This trade-off allows for two very different play styles throughout the game.

A dynamic facet of gameplay is that firearms wear out from use over time. As a weapon degenerates, its damage is reduced and it loses accuracy. However, worn-out firearms of the same type can be combined to make more reliable and powerful weapons. Weapon schematics can also be found and used to create various devices, such as the Rock-It Launcher that can fire various items such as lunchboxes and stuffed animals, or the bottlecap mine, made out of a Vault-Tec lunchbox, cherry bombs, a sensor module and bottle caps. Along with equipping various weapons, the player can also utilize different armors and clothing that may have effects that can alter various skills. For example, a pair of mechanic's coveralls may boost the player's repair skill while it is worn. Armor and clothing come in two main parts for the head and body, allowing a player to wear different combinations of hats and armor as well as masks and facial clothing, which can be worn with hats. Also, a player's inventory has a specified weight limit, preventing a player from carrying too many items. Story-related or essential items like Ammunition have no weight, due to the developer not wishing to bog down inventory management. The player character's weight limit can be increased by increasing the Strength stat in SPECIAL.

In addition to having Dogmeat in one's party, it is possible to send him out on his own to search for items such as weapons and ammunition, radiation medicine, and stimpaks. Dogmeat can be killed during the game if the player misuses him or places him in severely dangerous situations such as leading him into the deathclaw sanctuary. He cannot be replaced, unless one has the Broken Steel add on, in which a perk can be chosen that allows recruiting Dogmeat's puppy (Puppies!). Dogmeat and Dogmeat's puppies can be given stimpaks to heal them if needed.

The Karma system is an important feature in Fallout 3's gameplay. A player's actions, including conversation and combat choices, affect the player's status in the game world; a player who makes good decisions is received more positively by non-player characters, and a player who makes bad decisions has the opposite reaction. Crimes can also be committed by a player, and whichever faction or group that is harmed by a crime are fully aware of the player's action in most cases. Other factions that were not affected by the crime will not be aware of it, and since a town is usually its own faction, news of a crime committed in one town will not spread to another. Beware, however: good or evil deeds will cause a bounty by the opposite alignment group. Talon Company (if one has good Karma) or the Regulators (if one has bad Karma) will ambush the player character randomly, and are not bound to any particular area, appearing anywhere in the wastes. Factions can range in size and boundaries, however, and may not be restricted to a single area. The game world itself was planned to be significantly smaller than that of Oblivion's but is now similar in size.[1]

The game is set in a post-apocalyptic, retro-futuristic Washington, D.C. following the Great War. The war occurred on October 23, 2077 which caused immense damage and destruction despite lasting less than two hours.[2] Before the war, the Resource Wars brought riots to the streets, during which the United Nations disbanded, and Canada was annexed by the United States.[2][3]

The world map of Fallout 3 is dissected diagonally by the Potomac River, with the ruins of Washington in the south-east corner. Fallout 3 also includes a large metro system because many parts of Washington are closed-off areas only accessible through the tunnels.

Fallout 3 contains some variants regarding its ending.

Fallout 3 was initially under development by Black Isle Studios, a studio owned by Interplay Entertainment, under the working title Van Buren. Interplay Entertainment closed down Black Isle Studios before the game could be completed, and the license to develop Fallout 3 was sold for a $1,175,000 minimum guaranteed advance against royalties to Bethesda Softworks, a studio primarily known as the developer of the The Elder Scrolls series.[4] Bethesda's Fallout 3, however, was developed from scratch, using neither Van Buren code, nor any other materials created by Black Isle Studios. In May 2007, a playable technology demo of the canceled project was released to the public.[5][6][7]

Bethesda stated it would be working on Fallout 3 in July 2004,[8] but principal development did not begin until after The Elder Scrolls IV: Oblivion was completed.[9] Bethesda announced their intention to make Fallout 3 similar to the previous two games, focusing on nonlinear game play, a good story, and true "Fallout humor." Bethesda also stated the game is targeted for a rating of M for Mature, and would have the same sort of adult themes and violence that are characteristic of the Fallout series. Fallout 3 uses a version of the same Gamebryo engine as Oblivion, and was developed by the same team. Initially, Bethesda held the right to make only three Fallout games, with royalties to be paid to Interplay.[10]

In 2006, Bethesda bought the full Fallout franchise, leaving Interplay the right to make Project V13. Between May 2 and June 5, 2007 Bethesda showcased 5 pieces of concept art by Craig Mullins on the Fallout 3 website during the countdown to the teaser. The cinematic teaser trailer for Fallout 3, consisting of the first part of the intro, was released by Bethesda Softworks on June 5, 2007, after a 30-day countdown on the Fallout 3 website. On August 2, 2007, the game's website was opened.

The project was led by executive producer Todd Howard. Other producers include Ashley Cheng, Gavin Carter and Jeff Gardiner. The lead designer is Emil Pagliarulo who previously worked on Thief games as well as the Dark Brotherhood quests in Oblivion. The lead level designer is Joel Burgess. Other leads are lead artist Istvan Pely and lead programmer Steve Meister. PR and marketing for the game are coordinated by Pete Hines.

Game of the Year Edition

Fallout 3: Game of the Year Edition was released on October 13, 2009, for PC, PS3, and 360; this edition includes all five add-on packs, a Vault Secure poster on the back cover, and a copyright information booklet with a "Wasteland Survival Guide" cover. Mothership Zeta will not be available in any disc version aside from the Game of the Year edition.

The Art of Fallout 3 is a 95-page hardback artbook that was available with the Collector's Edition. It features concept art by Craig Mullins and Adam Adamowicz. The art showcases characters, creatures, locations, architecture, weapons and armor, and storyboards. 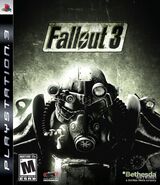 Box art for the Xbox 360 Version

Box art for the PC Game of Year Edition 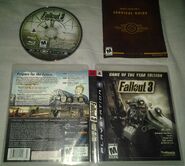 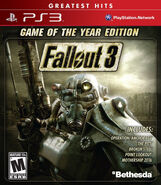 The Lone Wanderer in Springvale

A shantytown built around a bomb called Megaton 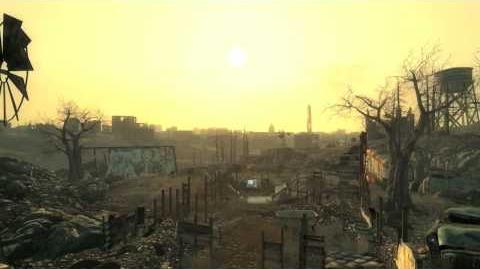 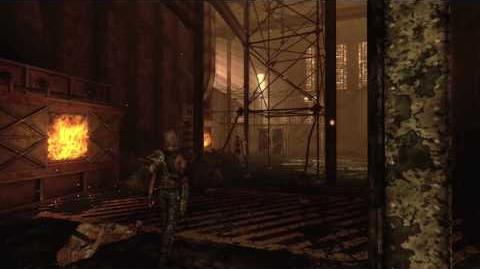 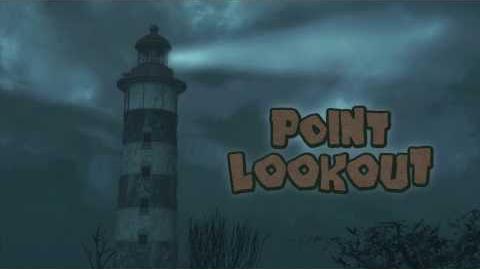 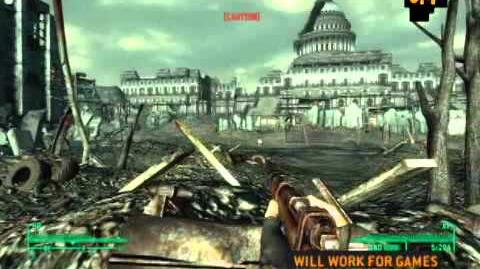