Traps in Fallout: New Vegas can be found all over the Mojave Wasteland. They are particularly prevalent within the Dead Money add-on.

Though not considered a trap in the technical sense, a small number of decaying vehicles can be found around the Mojave Wasteland. These nuclear-powered vehicles, suffering from two centuries of neglect, will catch fire and explode if sufficiently damaged (around five hits from a plasma rifle will destroy one outright). When a vehicle takes enough damage, it will release a small explosion and catch fire, giving the player several seconds to escape. Once that period has elapsed, the vehicle goes up in a much larger and more damaging nuclear explosion, similar in appearance and potency to a mini nuke. The explosion can be hastened by firing upon the flaming wreck.

An exploding car can be deadly to anything nearby. Anything standing on or next to the car will more than likely be killed instantly. In addition, the explosion may set off other nearby cars, potentially without any delay if the damage threshold is achieved. Fortunately, there are a minimal number of locations with multiple, destructible cars left close together.

Frag mines are commonly laid in areas occupied by hostile forces. They have a sensor that registers vibration on the ground, and when the vibration exceeds a certain level, it detonates. The length of the fuse is based on the player's Explosives skill; the greater the skill number, the longer the fuse. They require an explosives skill of 1 to disarm, meaning any player can disarm one. They can be picked up after being disarmed. Mines can be shot in order to cause premature detonation. Mines can sometimes be found tucked partly under orange traffic cones, boxes, dead bodies or other objects, making it harder to find and defuse them before they detonate.

Followers will trigger mines as well, which can prove troublesome even to a player who has the Light Step perk, which allows the player to never set off floor-based traps. If any enemy or follower steps directly on one there is a chance of them being knocked unconscious or killed instantly (when in Hardcore mode), as the blast could blow their leg(s) off.

A craftable variant of mines called a powder charge is commonly found around Powder Ganger camps. They work in the same way as mines and can be defused and collected in addition to being crafted by the player.

Bear traps are a spring-operated pair of spiked jaws that snap shut on the player's leg should the pressure pad in the middle be triggered. This can sometimes cripple the limb. A Repair skill of 23 is required to disarm them. Shooting the switch or dropping an object on it also works. Bear traps can be reset, but this requires a Repair skill of 55.

Swinging objects are simple, heavy objects (often a girder, automotive engine, or rotting brahmin body parts) chained to the ceiling and held up by a tripwire. When the wire is broken, the object swings down and impacts the player for a moderate amount of damage, especially when the trap deals multiple blows, which often occurs. The tripwire requires a Repair skill of 25 to disarm, or the object itself can be grabbed and manually moved to a safe "down" position without any required skill, or optionally shot. Because of the nature of the trap, it can remain dangerous even after the initial trigger. At certain angles, especially if walked into, it will cause damage, often several times in quick succession. It can also cause damage when manually moved by the grab action.

The grenade bouquet is a cluster of three frag grenades hung from the ceiling. When triggered, either by simply walking into it, shooting it, or hitting the nearby tripwire/pressure plate, the pins are pulled and the three grenades fall to the ground, exploding after a few seconds. Both the tripwire and the grenades themselves can be disarmed, the latter of which requires an Explosives skill of 30. Doing the latter adds the three grenades to the player's inventory. If the player lacks the required skill to disarm the trap, they may be able to shoot the rope holding up the grenades to make them fall and detonate, safely away from the player. This trap is extremely dangerous, as the combined force of three grenades can be deadly depending on the player's proximity to the blast. Even when at a respectable distance or behind cover the grenades can cripple limbs and do decent damage. They make a tell-tale rattle noise when they fall, alerting players if they fail to notice the trap beforehand, but their vector does not appear on the HUD like thrown grenades. 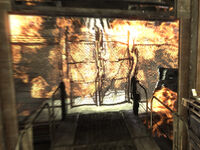 Gas leaks are areas that have filled with natural gases that ignite if any sort of combustion occurs within the area of the leak. They are usually found in tunnels and can be visually detected by noting a wavering distortion in the air. When a gas leak is ignited, anything in the immediate vicinity takes a small amount of damage, is set on fire, and is knocked down for a few seconds. This can be particularly dangerous in combat situations if the player is caught in the explosion and the enemy is not. Guns will set off a gas leak if fired within a cloud but not from outside. Energy weapons, such as the laser pistol, will set off the leak if the shot intersects the cloud at any point. The detonation of any kind of explosive, such as a frag grenade, within the Cloud will also set off the leak. Finally, any item with an open flame, such as the flamer, heavy incinerator, or Shishkebab, will ignite the gas if it comes into contact with the cloud, regardless of whether or not they are actually fired since the pilot light used to ignite them is active. Holstering them will prevent this. To safely remove gas leaks, ignite them from a safe distance. Some gas leaks can be removed by taking away their source, this is often a leaking valve.

Gas leaks are not very common but occur in a number of places like the kitchen of the Cantina Madrid and the suites in the Sierra Madre Casino & Resort in Dead Money and Vault 34 of the Mojave Wasteland.

Although most traps are man-made, deliberately placed to damage you, this is an exception, unless someone has intentionally cut or smashed a pipe, or simply cranked a valve.

A variation of this type of trap is used as an optional component of the quest There Stands the Grass. In this instance, the Courier is asked to deliberately ignite explosive gas which now fills the entirety of Vault 22. Unlike standard gas traps, being caught by this trap will kill the player almost immediately.

Added by the Dead Money add-on, Holograms aren't traps in the traditional sense of the word. Installed as part of the Sierra Madre Casino & Resort's security, Holograms are invulnerable to weapons and capable of killing anything unable to hide from or outrun them in a matter of seconds. A Hologram is only vulnerable through its emitter, which can be destroyed with weapons or disabled with a Repair skill check of varying difficulty.

The rigged shotgun is a simple but dangerous trap consisting of a single shotgun wired to a pressure plate or a tripwire. When triggered, it fires a single blast at the position of the trigger. A Repair skill of 45 is required to disarm the gun itself. Disarming the gun rewards the player with only one 20 gauge shotgun shell; the shotgun itself will be removed from the trap, but will not at any time be added to the player's inventory, or anywhere else for that matter.

Unlike traps such as grenade bouquets, rigged shotguns can be disarmed after having been triggered. 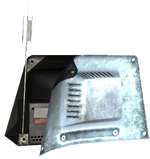 Another variation of the deadly ordinary objects theme rigged computer terminals can be found in certain locations. Attempting to use the terminal triggers the trap, causing a slight electrical shock followed by the detonation of the main frag grenade inside. It can be recognized by the antenna on the back and the warped rear panel. The trap can be deactivated by defusing the back panel. Disarming the trap will move the grenade into the player's inventory. The terminal can then be rearmed with a grenade from the player characters inventory, but this is of limited utility as NPCs are unable to trigger these traps. When you look at the terminal it says "Trapped Terminal," telling you it's a trap.

Although far less common in the Mojave, the rigged mailbox is still a threat. Much like how it performed in Fallout 3 when you approach it, the explosive sequence will start unless you disarm it in time. If you do, you will have the option of leaving it alone, have it explode by putting it on a timer for ten seconds or have it act as an improvised proximity mine.

- Sierra Madre radios that interfere with the explosive collar can be shot or switched off. Speakers were specially shielded to prevent vandalism. Some have broken over time as indicated by their activation light, however, and these damaged speakers can be destroyed.

Tripwires are thin, easily broken wires suspended a few inches off the floor, usually just behind doors so players won't see the posts it is tied to. Opening the door doesn't trigger it. Players with the Light Step perk can walk over them without fear. They require a Repair skill of 22 to disarm. The player must interact with the posts to disarm it, as the wire is intangible.

Far less common than the low tech variety, laser tripwires follow the same general principle for triggering and avoidance. They can be identified by the narrow beam of light that projects from a wall-mounted emitter. The emitter is also the point where it can be disarmed. They are often employed across an entryway. However, they can be set to project at various heights and angles, and even blatantly across a room. In order to hack or disarm a laser tripwire, the Courier needs a Repair skill of at least 50 or a Science skill of 50.

Pressure plates are weight-activated mechanisms set off when it senses pressure from the player stepping on it, thus triggering the associated trap. Bear traps have built-in pressure plates. The Light Step perk will allow players to avoid triggering either variety. Pressure plates require a Repair skill of 25 to disarm. The bear trap version can be triggered with a direct gunshot or an object.

All mines work on a proximity fuse. The Light Step perk will negate ordinary mine fuses but not the fuses of rigged mailboxes or concealed mines. The only other way to get past it is to disarm the explosive before its timer runs out.

Rigged equipment such as computer terminals are triggered by any attempt to use them. A separate area on the object must be interacted with to disarm it.

Although the rigged shotgun trap no longer provides a usable weapon when disarmed, as it did in Fallout 3, the change was made late in development.[verification needed]

If a throwing weapon (such as throwing spear, throwing knife, etc) is thrown at an armed bear trap, it results in an explosion.[verified]