Bethesda Softworks announced on October 18, 2010, that downloadable content would be available for Fallout: New Vegas, in keeping with its predecessor Fallout 3.

Each story add-on increases the level cap by 5, which in total increases the maximum level to 50. However, the trait Logan's Loophole, which was added when Old World Blues was released, allows limiting the cap to 30 in exchange for no addictions when using chems.

All of the add-ons were initially sold for $10 each, with the exceptions of Gun Runners' Arsenal ($4) and Courier's Stash ($2).

Fallout: New Vegas – Ultimate Edition was released in February 2012, and contains all downloadable content that was published for the game. 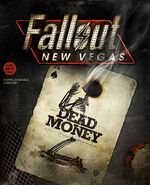 As the victim of a raw deal, you must work alongside three other captured wastelanders to recover the legendary treasure of the Sierra Madre Casino. In Dead Money, your life hangs in the balance as you face new terrain, foes, and choices. It is up to you how you play your cards in the quest to survive. It was released on December 21, 2010, for the Xbox 360, and on PlayStation 3 and PC platforms on February 22, 2011. 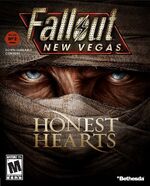 Honest Hearts takes you on an expedition to the unspoiled wilderness of Utah’s Zion National Park. Things go horribly wrong when your caravan is ambushed by a tribal raiding band. As you try to find a way back to the Mojave, you become embroiled in a war between tribes and a conflict between a New Canaanite missionary and the mysterious Burned Man. The decisions you make will determine the fate of Zion. It was released on May 17, 2011 on the Xbox 360 and PC platforms. It was later released on June 2 (NA), and June 5 (EU) for PlayStation 3, due to the PSN store being down from a group hacking the server. 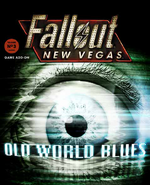 In Old World Blues you'll discover how some of the Mojave's mutated monsters, such as night stalkers and cazadores, came to be when you unwittingly become a human experiment at the hands of five pre-War doctors. You'll need to scour the research centers of Big MT in search of powerful weapons to join forces with them against Dr. Mobius, who seeks to destroy all their experiments - or use the technology to get revenge on them for abducting you. You are the only hope of saving the "Think Tank" and all of Science! - but the question is: is Big MT really what it seems? Old World Blues was released simultaneously on all platforms on July 19, 2011. 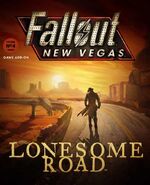 Lonesome Road brings the Courier's story full circle when you are contacted by the original Courier Six, a man by the name of Ulysses who refused to deliver the platinum chip at the start of New Vegas. In his transmission, Ulysses promises the answer as to why, but only if you take one last job—a job that leads you into the depths of the hurricane-swept canyons of The Divide, a landscape torn apart by earthquakes and violent storms. The road to the Divide is a long and treacherous one, and of the few to ever walk the road, none have ever returned. It was released on September 20, 2011 simultaneously on all platforms. 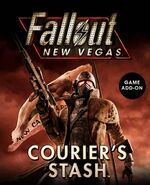 Players pre-ordering Fallout: New Vegas from selected retailers were granted access to special pre-order bonus packs, containing exclusive equipment to make the earlier stages of the game easier. The list of bonus packs is as follows:

These packs were combined into one pack titled Courier's Stash, which was released on September 27, 2011. 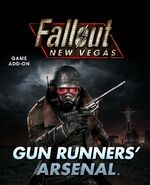