Fallout: New Vegas is a post-apocalyptic role-playing video game developed by Obsidian Entertainment and published by Bethesda Softworks. While New Vegas is not a direct sequel, it uses the same engine and style as Fallout 3, and many of its developers worked on previous Fallout games at Black Isle Studios. It is the fourth major installment in the Fallout series and sixth overall. The game is set primarily in a post-apocalyptic Nevada, California, Arizona and Utah.

Gameplay includes a combat system that allows for both first and third person view and features the ability to use weapon iron sights. The game also made a change from the true bullet flight paths in Fallout 3 to simulated bullet flight paths, which means the bullets, when fired, originate from the center of the screen's crosshairs, rather than the tip of the gun's barrel.[2]

Fallout: New Vegas utilizes the Damage Threshold (DT) mechanic. If an enemy has a high DT, some weapons may be ineffective. This is indicated by a red shield near the enemy's health bar when attacking it, both in and out of V.A.T.S. The damage threshold will be due to high armor or a built-in mechanic to that character, and will require the Courier to either retreat or attack with a more powerful weapon.

Hardcore mode is an optional setting that attempts to make the game more realistic, with gameplay elements such as dehydration, and non-instantaneous healing. It can be turned on and off mid-game. Either a trophy or achievement is awarded for completing Fallout: New Vegas on Hardcore mode. In order to earn it, the entire game must be played in the mode from the point first prompted until the endgame sequence, without ever turning the setting off. The Casual/Hardcore mode distinction is independent of difficulty settings.

The SPECIAL system returns and directly influences speech options and quests. Traits can be chosen and perks are gained every two levels.

The Vault-Tec Assisted Targeting System, or V.A.T.S., is an active pause combat system implemented in the game. While using V.A.T.S., the otherwise real-time combat is paused. Use of one's weapon can be seen in slow motion and greater detail. Attacks in V.A.T.S. cost Action Points and one can target specific body areas for attacks to inflict specific injuries. Melee weapons now have special moves in V.A.T.S., such as "Fore!" for golf clubs, along with special Unarmed moves such as "Ranger Takedown."

The player character will take more damage in V.A.T.S. than in Fallout 3 (75%, up from 10%). One can choose to activate or deactivate a dynamic "Kill Cam," which shows one's success in combat in slow motion. The setting can also be changed to only show this cinematic viewpoint for the last enemy of a group.

There is a Karma system incorporated alongside reputation system, similar to Fallout 2.[3] Reputation is a form of tracking relationships within the many factions and towns of Fallout: New Vegas, such as the NCR or Goodsprings. A high reputation with a faction or town may give certain benefits, such as gifts from the people who live there, while a low reputation may lead to hits being taken out against them. Karma in Fallout: New Vegas has less of an effect than reputation, which is the primary factor affecting how people react.

A modding feature allows for the modification of weapons by adding scopes, extended magazines, silencers, and more. Weapons can have a maximum of three attached mods, and they cannot be removed once placed. Obsidian implemented this feature as a direct response to the popularity of the Weapon Mod Kits mod for Fallout 3.[4]

There are unique versions of weapons in Fallout: New Vegas. Unique weapons have different textures and adornments. Counting all the add-ons, there are a total of 81 unique weapons. Some require the completion of a quest to find, are looted, or can be found in specific locations.

A new companion wheel has been added to quickly and easily give companions commands such as "Talk," "Use Ranged Weapons," and "Wait Here." It also makes it easier to restore their health using stimpaks and swap equipment. The companions also have specific likes and dislikes; giving a sniper companion a shotgun, for example, will result in a negative impact and decreased effectiveness.

The city of New Vegas, as well as other smaller settlements in the game, have a variety of colorful casinos or other forms of gambling to explore. In Fallout: New Vegas, several gambling mini-games have been added, including Blackjack, Roulette, and slots. Outside the casinos, many people across the Mojave play Caravan, a card game designed by Obsidian specifically for the game. One's Luck contributes to the outcome of gambling games.

One will receive money for winning, and casino floor managers will congratulate the player character with food, drink, or a comped suite at the hotel. Winning too much money after that, however, will result in the floor manager letting them know they will not be able to earn any more winnings. Although one can no longer gamble in that casino, they are still able to enter and buy items or food.

The Courier, the player character, was meant to deliver a package to New Vegas but they were intercepted by the Great Khans led by Benny, near Goodsprings. Benny steals the package, shoots them twice in the head, and leaves them for dead in a shallow grave. They are rescued by a robot named Victor, transporting them to nearby Doc Mitchell, who saves their life. After the Courier is given some medical tests, they enter the open world, and the quest Ain't That a Kick in the Head begins.

Fallout: New Vegas has a definitive ending which is dependent on what actions are taken during the game's events, with separate ending slides for each major location, political faction, and recruited companion.[3] 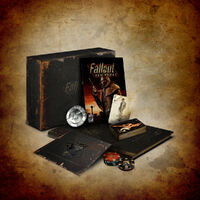 A total of six add-ons, Dead Money, Honest Hearts, Old World Blues, Lonesome Road, Courier's Stash, and Gun Runners' Arsenal were released. There were four different pre-order bonuses, including the Classic Pack, Caravan Pack, Tribal Pack, and Mercenary Pack. Each one had a unique suit of armor and a unique weapon not found in-game, along with a few other in-game items.

The Fallout: New Vegas Ultimate Edition was released on February 7, 2012 in North America and February 10 in Europe. The package contents are the base game along with all add-ons, including Gun Runners' Arsenal and Courier's Stash.

Discussions for New Vegas began between Obsidian and Bethesda in 2008/09. They knew the game would not be a direct, traditional sequel to Fallout 3, and it was referred to as "Fallout 3.5" within Obsidian. It was specifically designed to be more of an expansion rather than a sequel; Obsidian, however, saw the project as akin to the Grand Theft Auto titles Vice City and San Andreas - not numbered entries, but still full games in their own right. As Bethesda "had dibs" on the U.S. East Coast, Obsidian set the game in the American West. Obsidian submitted a three-page pitch to Bethesda for the project, which they named "Fallout: Sin City." The game was later renamed to "Fallout: New Vegas."[5]

The team initially did not have access to the source code until Bethesda cleared the security of it. They used development tools for a few months before they were given the source code, which let them dive in to deeper development.[6]

The game was originally slated to have three playable races - human, ghoul, and super mutant. This idea was abandoned due to issues with the engine, specifically with how the weapons and armor would work.[5] Project director Joshua Sawyer described the development process as having used "sprint overtime," though he does not consider it crunch time.[7] The biggest technical issue that the team faced during development was working with the PS3's hardware; as New Vegas is a very memory-intensive game, they had difficulty with the PS3's split memory pool.[8] The game spent a total of 18 months in development.[9] Sawyer has stated he believes the game realized most of his development ideas during those 18 months.[10]

The game was announced on April 20, 2009, at Bethesda's London showcase.[11] The first official information was released in the February 2010 issue of PC Gamer. A cinematic teaser trailer and a gameplay trailer were then subsequently released.

Fallout: New Vegas was developed by Obsidian Entertainment, a company founded by Feargus Urquhart and Chris Avellone, two of the creators of Fallout 2, originally at Black Isle Studios. The project was led by Joshua Sawyer, one of the lead designers of Van Buren (the canceled Fallout 3 project by Black Isle Studios). John Gonzalez was the lead creative designer, while Obsidian founder Chris Avellone, who worked on Fallout 2 and Van Buren, was a senior designer. Joe Sanabria was the lead artist. 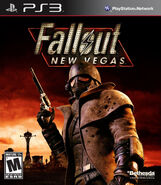 Box art for the Xbox 360 version 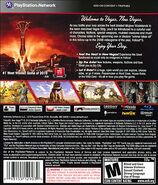 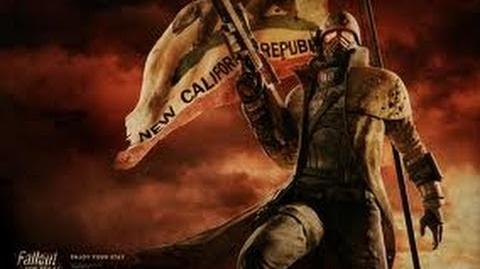