Fallout: Brotherhood of Steel (truncated as Fallout: BoS), is an action role-playing game developed and self-published by Interplay Entertainment for the PlayStation 2 and Xbox game consoles. Released January 13, 2004, it is the fourth video game set in the Fallout universe, the second spin-off, and the first to be released on home video game consoles.

According to an Interplay employee, Brotherhood of Steel was not intended to be a canonical continuation of the original games, only taking place within a recognizable tangent of the Fallout universe.[1] The idea of the game not being fully canon was reiterated by Todd Howard, who mentioned the events of the game are not considered to have occurred in the continuity of Fallout 3.[2]

Brotherhood of Steel is the last Fallout title to be released before the franchise was sold by Interplay Entertainment to Bethesda Softworks. Although the game was created by Interplay, most of the writers and developers of the original games did not work on Brotherhood of Steel, with the exception of Brian Freyermuth and some quality testers of the originals becoming level designers and scriptors, such as Alendor E. Vulaj, Henry C. Lee, Rene Hakiki and Steve McLafferty. A sequel, Fallout: Brotherhood of Steel 2, was initially planned, but was canceled.

Brotherhood of Steel plays like a dungeon crawling run-and-gunner. The game also contains some light platforming elements such as jumping across bottomless pits and crouching under lasers which will instant kill the player. While puzzles are absent for most of the game, chapter three has a few of them. Skills have the same function as perks in other Fallout games. Each playable character has some skills that are unique to them. The game allows for two-player co-op multiplayer. Due to no split screen, the players share the same screen and the players' boundaries are restricted by the camera, forcing the two players to stay close and move in tandem.

There are very few NPCs that can be interacted with, and while the player can speak with them, the game aims to tell a mainly linear and fixed story so there are not dozens of branching paths, although there are a few consequences for some dialog choices. The game has quests given by these NPCs and there are several sidequests the player can do for rewards. Some NPCs are merchants that will buy and sell, with Jesse being chapter one's merchant and a pair of ghoul brothers for chapter two.

Apart from multiplayer, the game does not feature companions except for a few moments where the player must follow an NPC; the one exception to this if the player unlocks the Man's Best Friend skill which allows a dog named Dogmeat to follow the player and attack enemies. However, this skill is not available for Cain players. If Dogmeat is defeated, he will return at the next save point.

Combat in Brotherhood of Steel is in real-time and there is no V.A.T.S. Players can crouch behind obstacles, lock onto enemies, and dodge roll to avoid damage. Certain melee weapons can also be charged for greater damage as well.

There are 56 weapons in total including 6 glove weapons, 3 club weapons, 4 hammer weapons and 7 bladed weapons for a total of 20 Melee Weapons. There are 3 Small Guns pistols, 3 burst-fire, 3 rifles, 2 shotguns and 3 weapons that can be dual-wielded for a total of 14 Small Guns and 8 Big Guns. There are 2 Energy pistols, 5 rifles and 1 weapon that can be dual-wielded for a total of 8 Energy Weapons and 6 Explosives. These weapon types overlap; e.g. a home-made laser pistol is a homemade weapon, an energy weapon and a gun type. The highest damage weapon, other than the mini nuke grenade, is the Shredder, a Big Gun with 480-606 damage.

The game takes place in Carbon, Texas, in the year 2208, 47 years after Fallout and 33 years before Fallout 2. The player character is called the "Initiate" and chooses to control one of three initial characters: Cain, Cyrus, or Nadia, all of whom have pledged their allegiances to the Brotherhood of Steel and have become initiates.

The action takes place in only one zone per chapter. A zone is composed of many locations and a player character can return to previously visited locations when they want until they entered into a new chapter and a new zone (Carbon, Los or Secret Vault). They can also sometimes not be able to visit a new location until the storyline advances. There are 50 separate maps of varying size in the game, the primary locations include those as followed.

“A lot of the FO:BOS team are old-time fans of the Fallout games. During the project (very much so during the initial stages of conception and planning), we tore through all and any materials on the subject matter - and believe me when I say that the Interplay Fallout Archive is extensive in that respect (it's not as grandiose as that final scene from 'Raiders...' but it's damned close). We discussed story and setting with Black Isle ambassadors, and followed their recommendations and ideas. We like the genre, we like the locale. Given the choice, I'd go for Fallout over Baldur's Gate because I'm really not that big a fan of 'Swords and Sorcery'. Give me the wasteland any day of the week.

But we wanted to carve out our own niche, and tell our own stories seen through our eyes. Maybe this could have been made clearer from the get-go, I guess we were hoping that this should have been rather obvious but in hindsight it seems we were wrong. Is there an answer that will appease your "Why the hell change it..."? Probably not, because when you get right down to it, we changed it because we wanted to. We're not pulling a 'Lucas' and re-writing the previous games, we're not telling you what you believe about them to be false. They are your games and always will be. This is our game. If you play it and you like it, then good for you. If you don't, well... that's okay, too.”— Interplay employee[1]

To create the game, Interplay used the "Snowblind" game engine also used in the console games Dark Alliance and the online-capable PS2 game Champions of Norrath.[4][5] 480p and Dolby digital are supported.[5]

Level designer Dan Kingdom mentioned that the Black Isle Studios team was very interested in what they were doing with F:BOS, and from the very beginning they had a lot of contact with them regarding storyline, setting and characters. The Black Isle team also provided them with a mountain of information to help out with all the details, from timelines to bibles.[6] The game's website mentioned, "We've read the Fallout bible and updates, worked with people in BIS on the concept, and determined that we'd stay within the guidelines of the Fallout universe but at the same time presume that this is a different type of game for a different audience. Fallout: BOS has its own setting, characters, and events that fit within the larger Fallout world. Nothing in this game contradicts the events that occur in Fallout or Fallout 2."[7]

The soundtrack background music and music by modern bands, such as Slipknot, Killswitch Engage, Celldweller, Meshuggah, Skinlab and musician Devin Townsend. For modern bands, however, the game diffuses, playing only the instrumental and this music is only played during boss fights.

All voice acting citations are from the Internet Movie Database.[8] Fallout: BoS is the first Fallout game to not feature the introduction voice-acted by Ron Perlman, who is famous in the Fallout series for the line, "War...war never changes." The narrator of this game is Tony Jay, the Lieutenant from Fallout.

Armpit being threatened by raiders

Jane leading a crew of raiders in Carbon

Jane in a conversation with the Initiate

The Initiate fighting in the Los arena

The Initiate fighting a mutated Attis, as one of the final bosses

A non-final version of the cover, featuring playable character Nadia

Artwork by Jeff Jumper of Cyrus and Nadia fighting feral ghouls, with Blake above 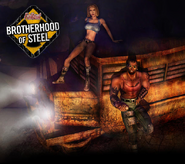 Nadia, armored up and in combat 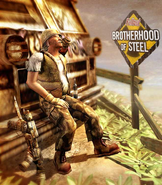 Jesse, a man missing an arm who is one of the game's merchants

Jane, a raider and slave trader and one of the main villains

The Vault Dweller, the now-elderly protagonist of the first game

Rhombus, a character from the first Fallout 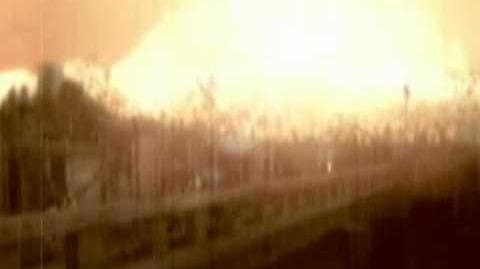 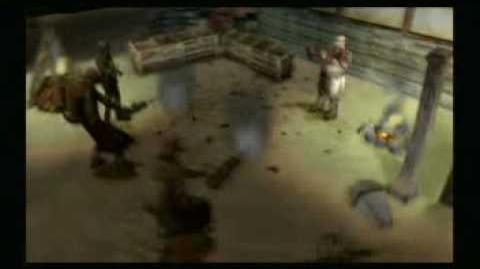 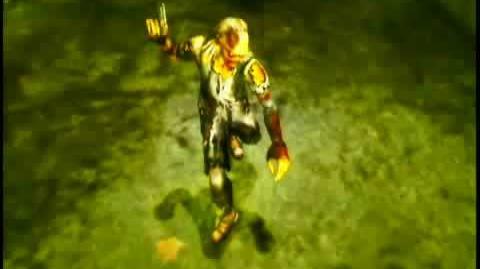 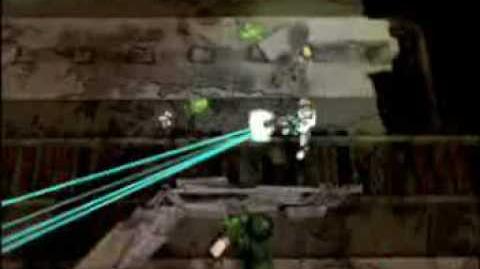