Fallon's was a department store chain in the pre-War United States.

Fallon's was one of the biggest brands in Massachusetts, a vast retail conglomerate with a tradition of quality and affordability.[1] Its flagship store was located in West Roxbury, with branches across Massachusetts, including Concord, downtown Boston and the futuristic General Atomics Galleria. The breadth of merchandise available in its stores included expensive jewelry, clothes and other luxury goods, leading to the corporation being quite security-minded, especially after their flagship store was targeted in a heist perpetrated by Eddie Winter's crime family in 2077.

The team included Rodrigo Palomar (freelance safe cracker) and Mackie (a Winter associate), who targeted the store's jewelry department and real diamonds kept on display. The heist was successful, although Palomar tripped the alarm and got Mackie arrested. In the end, Fallon's was down a bag of diamonds and Winter decided to give all of Palomar's share to Mackie as compensation for Palomar's error.[2]

Together with the losses from shoplifters, Fallon's aggressively upgraded its security, going as far as using its clout to force the historic Faneuil Hall marketplace to install Protectron security bots. However, the rushed nature of the installation led to a major security incident that killed seven, including a Fallon's cashier, and sent their profit margins through the floor.[3]

Most importantly, although most businesses collapsed after the Great War, Fallon's survived through its founders and the Fallon family. Fallon's Basement in Diamond City continues to operate even as late as 2287.[1]

Emma Fallon, one of the company's owners, was a friend of Patricia Grunwald, an employee at Valley Galleria in Appalachia. She personally handled one of Grunwald's orders for Fallon's sundresses.[4]

Fallon's appears in Fallout 4 and Fallout 76.

Downtown area of the Commonwealth

Ad on an overpass

In the General Atomics Galleria 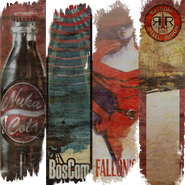